According to 9to5Mac, a mysterious shortage in supplies of the iPod Shuffle is being reported across Apple’s retail outlets and online stores by multiple sources. It is being said that Apple employees have been officially informed about the shortage as well and they have been instructed to direct customers at retail stores looking to buy a Shuffle to Apple’s online stores. Furthermore, even Apple’s online store in Canada doesn’t seem to have the product ready in stock and is shipping the iPod shuffle in “7-10 business days”. 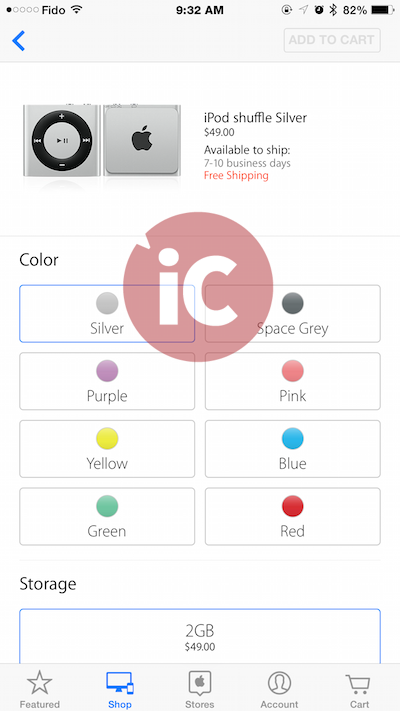 The current generation iPod shuffle was introduced in 2010, but it has seen a couple of color refreshes over the past couple of years. It is therefore unclear what this shortage means but it is being speculated that it represents a “temporary lack of components” and that Shuffle production will pick up full speed in the near future.

In comparison, the two remaining iPod lines i.e the iPod touch and the iPod Nano, are both currently listed as available to ship in 24 hours at Apple’s online store in Canada.

Apple has launched MLS Season Pass globally on the Apple TV app, ahead of the 2023 season that kicks off on February 25, 2023. An MLS Season Pass will provide fans all MLS and Leagues Cup matches, plus hundreds of MLS NEXT Pro and MLS NEXT games as well. Apple says there’s some free on-demand […]
Gary Ng
47 seconds ago

Anker has finally broken its silence on the eufy Security fiasco. eufy is Anker's privacy-centric smart home security brand, which landed in scalding hot water after its always-encrypted, local storage-only surveillance cameras were found to be streaming unencrypted live footage that could be accessed through a simple media player. Responding to many calls for answers...
Nehal Malik
3 mins ago

Today, Samsung has revealed the Galaxy S23 series of devices. During its annual keynote, the company revealed details on the new flagship devices encompassing the Galaxy line. This year, Samsung is pleased to announce the Galaxy S23, Galaxy S23+, and the premium Galaxy S23 Ultra. The new series of Galaxy phones iterates on its predecessors...
Steve Vegvari
23 mins ago