Microsoft has today announced the launch of its new Skype 8.0 for desktop with a bunch of new features including HD video and screen-sharing in calls, a chat media gallery, support for @mentions in chats, and file and media sharing up to 300 MB. The new version will replace the existing version of Skype which will stop working after September 1, 2018. 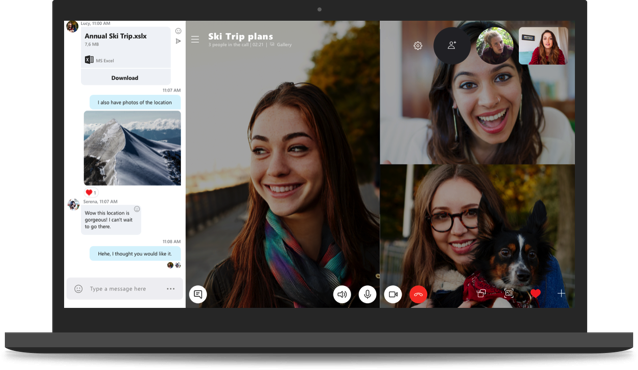 According to TechCrunch, Skype 8.0 will be getting support for encrypted audio calls, texts, and file sharing as well as built-in call recording later this year. But even with 300 million monthly users, Skype has stopped growing in recent years due to stiff competition from Apple’s FaceTime, and apps like Facebook Messenger and WhatsApp.

To better compete, Microsoft is now focusing on consumer-friendly features, with the added support of HD video calls which can include up to 24 people.

The most significant of the forthcoming additions include an end-to-end encrypted experience where Skype audio calls, text messages, and shared files like images, audio and video, and secured with the industry standard Signal Protocol.

And, at long last, Skype is adding built-in call recording. Many Skype users today use third-party add-ons in order to record calls – something that should have prompted Skype to react years ago by making this a native option. The calls will be recorded in the cloud and everyone in the call will be notified the call is being recorded, for privacy’s sake and for legal reasons.

Skype 8.0 for iPad will be rolling out soon, whereas the Mac version is now available as a free download at this link.

YouTube is catching up to Twitch and is now offering support for YouTube Emotes. These custom images can be used across the platform while interacting with chat and the comments in a video. Currently, YouTube is supporting a variety of Gaming Emote. In a YouTube Help blog post, a community manager highlights the fact that...
Steve Vegvari
43 mins ago