200 Apple iBeacons for the Blind to be Installed in Toronto Stores, Restaurants

The CNIB, a charity that provides community-based support for people who are blind or partially sighted, has launched a pilot project called ShopTalk which plans to install 200 wayfinding smart beacons in Toronto stores and restaurants (via CBC News). The project will install and programs palm-sized Apple iBeacons that use Bluetooth signals to connect with nearby users’ phones via an iOS app called BlindSquare. 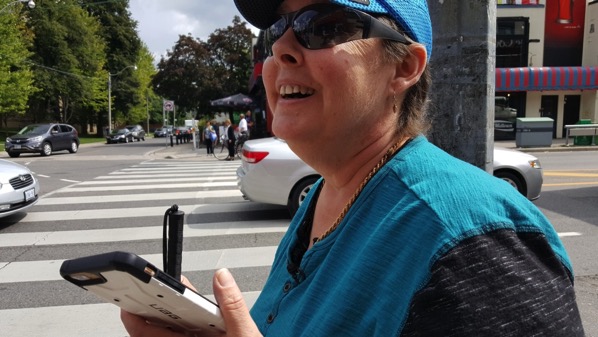 The project is aimed at providing directions to help the blind navigate through doors and vestibules, to service counters, washrooms, and other important parts of stores and restaurants. The technology has already been used in other cities around the world, most notably in Wellington, New Zealand, where a project called “No Dark Doors” has already installed the beacons in 200 downtown shops.

The CNIB is hoping to similarly install 205 beacons by next February around its community hub near St. Clair subway station, said Kat Clarke, a spokeswoman for the CNIB. “Somebody who comes to our programs might want to eat after, or do some shopping, so we really wanted our immediate neighbourhood to be accessible.”

Vaile, who just turned 56, lost her sight to complications of Type 1 diabetes and several strokes in her 30s. Being an artist and photographer, she was devastated. “Being outside when you can’t see — it doesn’t matter whether you’re used to it or not — is a scary prospect,” she said. Now the self-described “technology buff” gives back by volunteering to help the CNIB test new technologies like the blind beacons.

The CNIB is now reaching out to local businesses to let them know that they can get the beacons installed for free.