Remember Geohot and his legal troubles with Sony? Well, it appears both parties have settled the case out of court. A joint statement was issued on the Official Sony Playstation Blog:

Sony Computer Entertainment America (â€œSCEAâ€) and George Hotz (â€œHotzâ€) today announced the settlement of the lawsuit filed by SCEA against Hotz in federal court in San Francisco, California. The parties reached an agreement in principle on March 31, 2011. As part of the settlement, Hotz consented to a permanent injunction.

Both parties expressed satisfaction that litigation had been quickly resolved. â€œSony is glad to put this litigation behind us,â€ said Riley Russell, General Counsel for SCEA. â€œOur motivation for bringing this litigation was to protect our intellectual property and our consumers. We believe this settlement and the permanent injunction achieve this goal.â€

â€œIt was never my intention to cause any users trouble or to make piracy easier,â€ said Hotz, â€œIâ€™m happy to have the litigation behind me.â€ Hotz was not involved in the recent attacks on Sonyâ€™s internet services and websites.

In the action, SCEA accused Hotz of violating federal law by posting online information about the security system in the PlayStation 3 videogame console and software that SCEA claimed could be used to circumvent the security system in the console and allow the playing of pirated videogames. Hotz denies any wrongdoing on his part. Hotzâ€™s motion to dismiss for lack of personal jurisdiction was still pending before the federal court in San Francisco but a preliminary injunction was issued requiring Hotz to take down the postings challenged by SCEA.

â€œWe want our consumers to be able to enjoy our devices and products in a safe and fun environment and we want to protect the hard work of the talented engineers, artists, musicians and game designers who make PlayStation games and support the PlayStation Network,â€ added Russell. â€œWe appreciate Mr. Hotzâ€™s willingness to address the legal issues involved in this case and work with us to quickly bring this matter to an early resolution.â€

I bet George Hotz is relieved to have settled out of court. We may never hear the details about the settlement conditions. Will Geohot continue to pursue his jailbreak of the Sony Xperia play, or will he call it quits with Sony? I’m still hoping for another ‘epic’ rap video, maybe to close this whole saga? 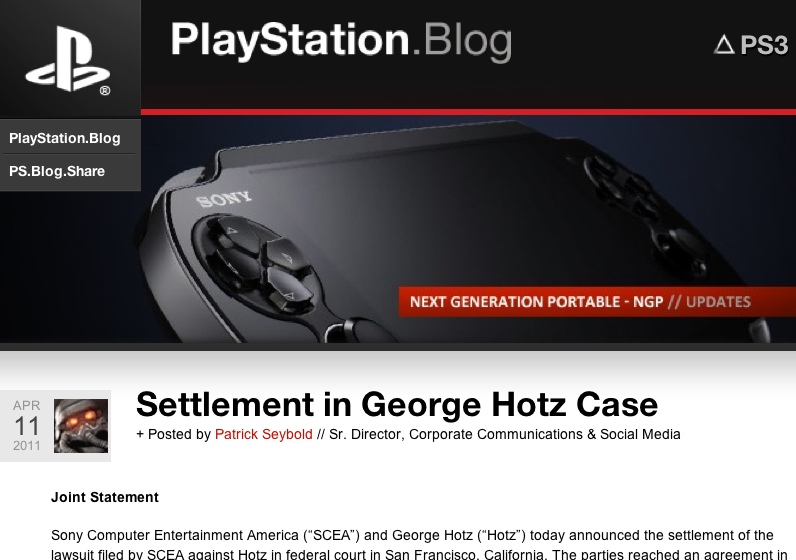