Inspired by the new Splatoon 3 game, a Special Edition Nintendo Switch – OLED model is set to release on August 26th, which will include a set of one blue and one yellow gradient Joy-Con controllers with white underbellies and a white, graffiti-themed Nintendo Switch dock. 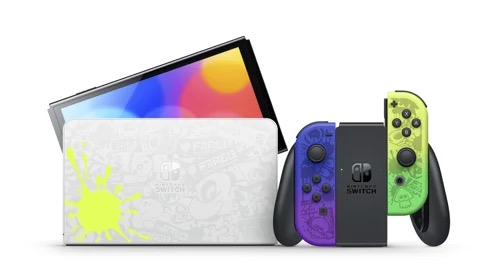 In the Splatoon 3 game, you’ll engage in chaotic 4-v-4 Turf War clashes across a mix of new and returning stages. The game features a single-player campaign and the next iteration of the co-op Salmon Run mode.

Join Agent 3 in the single-player story mode for a fight against the unruly Octarians and discover the secrets of a mysterious place called Alterna and the Fuzzy Ooze. When diving into Salmon Run, you’ll ink up with teammates to fend off waves of dangerous Salmonid bosses, some of which are colossal in size!

The Nintendo Switch – OLED Model Splatoon 3 Special Edition will be available in stores at a suggested retail price of $469.99. More information is available at https://splatoon.nintendo.com/ca.

[caption id="attachment_365768" align="aligncenter" width="1000"] Image: DuckDuckGo[/caption] Privacy-focused web browser DuckDuckGo has announced that its third-party tracker loading protection will now also work against Microsoft tracking scripts on third-party websites — reports The Verge. Advertising services use trackers to follow users across websites and profile them. These user profiles are then used to serve interest-based and...
Nehal Malik
1 hour ago

Twitter on Friday confirmed a December 2021 security breach that stole data from more than 5.4 million user accounts using a zero-day exploit — reports BleepingComputer. The hack exploited a vulnerability in the mechanism that Twitter lets users link email addresses and phone numbers to their accounts. Threat actors were able to submit an email...
Nehal Malik
24 hours ago