Spotify has launched a “Netflix Hub” with soundtracks, playlists, podcasts, and exclusive content related to programming on the streaming video service. 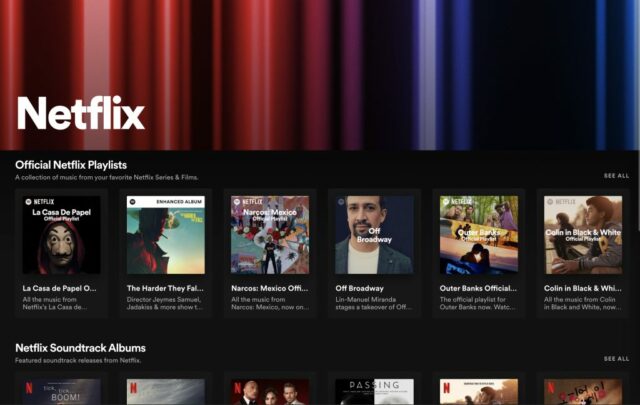 Netflix and Spotify have announced an all-new “Netflix Hub on Spotify” for Netflix fans to access original soundtracks, playlists, and podcasts of their favorite series and movies, along with exclusive content by Spotify.

Spotify’s Netflix hub is available to both Spotify Premium subscribers and free users (though in the latter case, you will still need to listen to ads between songs), and includes tunes from popular shows like Squid Game, Cowboy Bebop, Bridgerton, and more. A selection of official Netflix podcasts have landed on the streaming platform, too.

Both Netflix and Spotify see the Netflix Hub as an opportunity to capitalize on the success of Netflix’s wide slate of originals. “Today’s trending shows and movies aren’t just inspiring fandoms, they’re also fueling internet-wide obsessions,” Spotify says of the hub. The company cites the overwhelming viewership of Squid Game as a recent example of this obsession.

In addition to playlists tied to popular films and series, there are exclusives like an “enhanced album experience” tied to action Western The Harder They Fall. Jay-Z hosts a behind-the-scenes look at the film’s soundtrack and exclusive material from artists like Kid Cudi, Koffee, and Lauren Hill. Also, as the second part of the final season of La Casa De Papel (Money Heist) arrives, new cast videos and a playlist with tracks from the final episodes are appearing on the hub along with a quiz based on the show’s characters.

Having a central location for all Netflix listening content will be beneficial for both Netflix and Spotify. The companies are right: Netflix fandoms are intense and eager for more than just the content they can get from the Netflix app.