Spotify Can Now Generate a Playlist for Your Pet

Music streaming giant Spotify has today announced the launch of a new Pet Playlist generator which can create a playlist that both you and your pet will be able to enjoy together. The generator asks you to select from one of the five pet options i.e. cat, dog, iguana, bird, or hamster, and pick a few personality traits to begin (via The Verge). 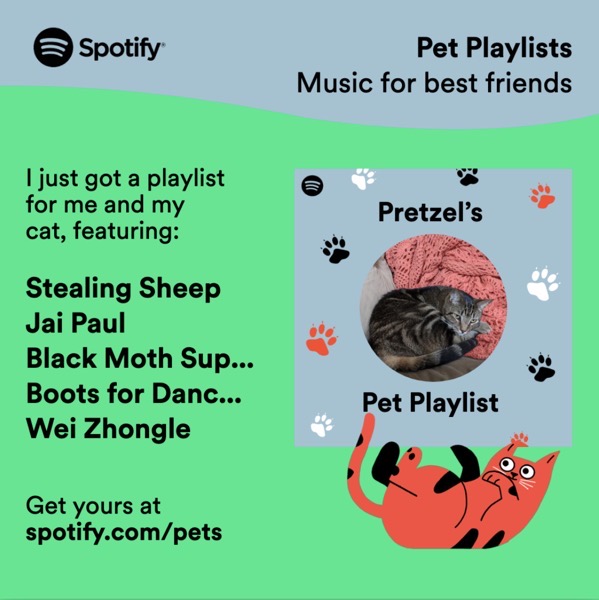 Once you have selected your pet and picked some of its traits, such as energetic or relaxed, shy or friendly, and apathetic or curious, you will be able to add your pet’s name and a photo. Spotify will then generate a playlist for your pet with a custom playlist icon using your pet’s name.

The playlist seems to include songs that you will most likely enjoy based on your existing Spotify playlists while keeping their tempo fast, slow, or varied depending on the personality traits you selected.

While music for pets isn’t an exact science, we consulted with experts in the pet industry for the best approximation for what might work best for our featured animals. Incidentally, we only use the information you provide us to create your Pet Playlist. The information is not stored and is not used for any other purpose.

To generate a Spotify playlist for your pet, head over to this link.

Ian Scott, chairman of the Canadian Radio-television and Telecommunications Commission (CRTC), told the House of Commons Industry and Technology (INDU) committee that he was once the victim of an e-mail spoofing scam — reports The Globe and Mail. Apparently, bad actors were able to impersonate Scott's e-mail address an undisclosed amount of time ago. The...
Nehal Malik
3 mins ago

Tesla and SpaceX CEO Elon Musk will purchase Twitter again with his original terms at $54.20 per share, as revealed yesterday in a surprise u-turn. The decision comes ahead of Musk’s scheduled deposition starting tomorrow and his October 17 Supreme Court case in Delaware with Twitter, as the Tesla leader originally wanted to renege on […]
Gary Ng
15 mins ago