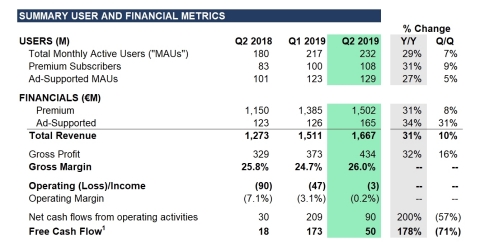 “The business outperformed our expectations in 2Q19, with Gross Margin up slightly Y/Y, despite our investments in podcasting, and revenue grew more than 2.5x faster than the growth in operating expenses,” the company noted in a press release.

While the company has added nearly 8 million paying customers in the last three months alone, Spotify still believes it’s not quite close enough to its planned target of 110 million. The company also noted that its “winback” campaigns, which are used when people who don’t continue paying for the product get offered a further three months at discount, are working quite well.

Intake from our bi-annual campaign was in line with our expectations, monthly churn declined both sequentially and Y/Y to a record low 4.6%, and our winback percentage on gross ads reaccelerated Q/Q. However, intake into our Student product was below plan.

Spotify also highlighted that Podcasts are proving to be one of the biggest drivers of growth and in three months, the company has seen listener figures increase by more than 50%. The company now expects to see its user numbers hit up to 245 million by the end of the next quarter.

According to the European Union's final deadline, all new phones sold in the region, including future iPhones, will have to use USB-C for wired charging by December 28, 2024, The Verge is reporting. The EU’s new USB-C legislation, which has just been published in the bloc’s Official Journal, the rules will officially enter into force in...
Usman Qureshi
50 mins ago