Have you been avoiding Starbucks’ free ‘Pick of the Week’ cards because you’re too lazy to manually enter in promo codes? Well those days are gone as you can now redeem codes by using your iPhone’s camera.

iPhoneinCanada.ca reader Keith confirmed Canadian ‘Pick of the Week’ cards are redeemable via the iPhone’s camera; codes are quickly scanned and identified by the camera as a white rectangle will outline the code, as seen below (you can even test it out yourself by holding your camera up to our image): 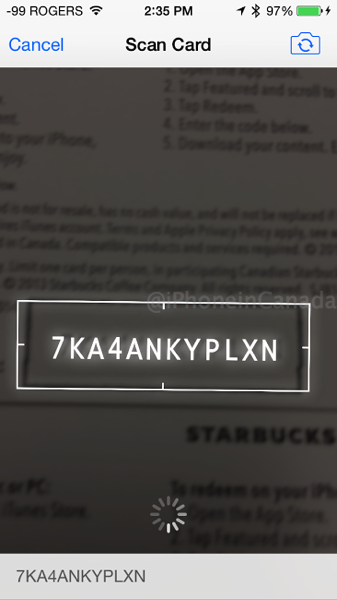 How to redeem a promo code using your iPhone’s camera?

Easy. Launch the App Store on your iPhone. Scroll to the very bottom and tap ‘Redeem’, then ‘Use Camera’ and then point it at your ‘Pick of the Week’ card promo code and watch magic happen.

Let us know how this works out for you!

HBO has made the decision to premiere the fifth episode of The Last of Us on Friday, February 10th to avoid overlap with Super Bowl LVII. For us in Canada, this means fans will be able to check out the upcoming episode on Crave a few days early. HBO's The Last of Us has been...
Steve Vegvari
9 mins ago