While we still mourn the passing of legendary Steve Jobs, an interesting fact has just come up. A report by TechCrunch indicates that Steve Jobs’ videos featuring his inspiring speeches and presentations have been getting millions of hits all over the web. One of the most famous speech by him was the commencement speech at Stanford University which he delivered back in 2005. Only yesterday, the video has been viewed over 8,000,000 (8 Million) times as claimed by Visible Measures. 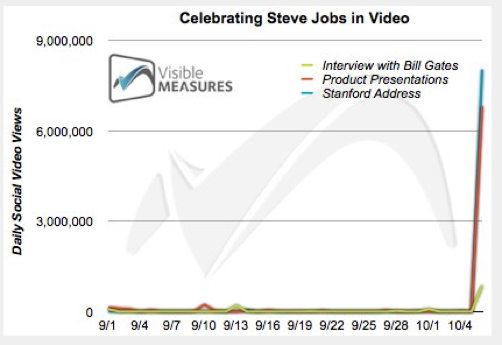 Not only this, lots of Apple product launch presentations by Steve Jobs have been viewed millions of times on YouTuve in the last 24 hours:

Without a doubt, Steve Jobs’ videos are an important part of how we remember the greatest innovator this world has ever seen. Take a look at his commencement speech at Stanford below:

Meta CEO Mark Zuckerberg warned employees of a hiring freeze and impending corporate restructuring during a weekly Q&A session on Thursday — reports Bloomberg. Facebook and Instagram's parent company will cut costs and, for the first time, jobs amidst economic challenges and a notable downturn in revenue. Meta this year reported its first-ever yearly decline...
Nehal Malik
4 mins ago