A new exhibition at the National Portrait Gallery, which explores the concept of “American Cool” through some of its most iconic figures, features the late Apple CEO and co-founder Steve Jobs, CultofMac is reporting. Jobs features in the last part of the exhibition titled “The Legacies of Cool: 1980-present”, with his portrait included alongside the likes of David Byrne, Willie Nelson, and Jon Stewart. 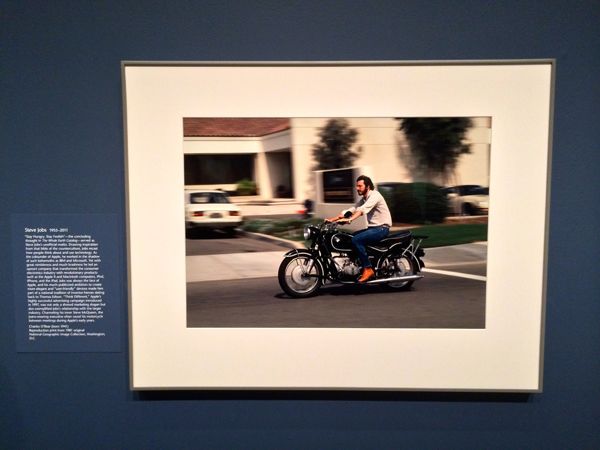 Steve Jobs’ portrait (shown above), that depicts a bearded Jobs from 1981 riding a motorbike between meetings at Apple, was chosen by curators Joel Dinerstein and Frank H. Goodyear for the exhibition. The photo was taken by photographer Charles O’Rear, who is most widely known for his digitally augmented “Rolling Hills” background used for Microsoft Windows XP.

“Stay Hungry, Stay Foolish” — the concluding thought in The Whole Earth Catalog — served as Steve Job’s unofficial motto. Drawing inspiration from that bible of the counterculture, Jobs recast how people think about and use technology. As the cofounder of Apple, he worked in the shadow of such behemoths as IBM and Microsoft. Yet, with great nimbleness and much brashness he led an upstart company that transformed the consumer electronics industry with revolutionary products such as the Apple II and Macintosh computers, iPod, iPhone, and the iPad. Jobs was always the face of Apple, and his much-publicized ambition to create more elegant and “user-friendly” devices made him part of a national tradition of inventor-[heroes] dating back to to Thomas Edison. “Think Different,” Apple’s highly successful advertising campaign introduced in 1997, was not only a shrewd marketing slogan but also exemplified Jobs’ relationship with the larger industry. Channeling his inner Steve McQueen, the jeans-wearing executive often raced his motorcycle between meetings during Apple’s early years.

The exhibition runs through September 7.