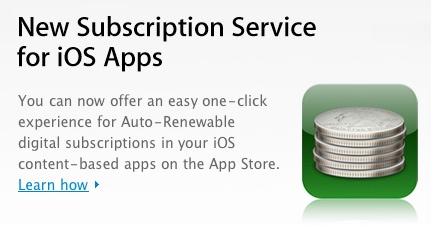 When Apple introduced their new App Store subscriptions policy, many publishers were downright angry. The controversy involves the 30% cut Apple will take from publishers, which has sparked a massive controversy on the web.

Readability wrote in an open letter to Apple regarding their app-rejection, stating they were rejected because Apple was targeting “software as a service” (SaaS) apps. John Gruber interpreted their rejection under the publisher model, as Readability offers subscriptions to ‘ad free’ blog content for $5/month (along with a 70/30 revenue share with content providers)–therefore defining them as a ‘publisher’. Who’s right?

This ‘confusion’ led one person to send off another “email to Steve”, which has landed in the hands of MacRumors:

As a full time iOS developer, I am concerned (and confused) withe the new App Store guideline regarding “Apps offering subscriptions” (section 11.12).

Most of the iOS apps I have developed, as a contractor for other businesses, have been free apps that had login screens to allow the user access to some amount of private data. and/or service. These businesses have all been well established companies that sell some kind of service to their customers (Software As a Service companies) and the iOS app was merely another “portal” for their users to access their data/services (in many times, in a limited i.e. “mobile” fashion)…. for example; SalesForce. I am concerned that most of these businesses will choose to not develop an iOS app for their customers if the IAP & subscription policy was in place.

Would these type’s of free apps be still be allowed in the App Store or will they now be expected to use IAP?

We created subscriptions for publishing apps, not SaaS apps.

The App Store Subscription policies appear somewhat unclear. You know when they will be crystal clear? After the Apple-imposed June 30th deadline for integrating the In App Purchase API into existing apps. That is when we will find out which apps stay, and which apps leave the App Store.

Are SaaS apps like Netflix in trouble, should they fall into the publisher model and be subject to a 30% cut to Apple? I think we should remain prudent and wait for Apple to clarify these policies. If there is enough noise, Apple will respond. Remember “antennagate?”

What do you think about Apple’s new in-app purchase policies?