Apple co-founder Steve Wozniak believes China’s top smartphone maker Xiaomi has the ability to challenge the iPhone’s share of the U.S. smartphone market, TechinAsia is reporting. Woz gave the statement during his visit to the Xiaomi headquarters in Beijing, where he sat with the company’s CEO Lei Jun side-by-side for a panel interview with invited guests. 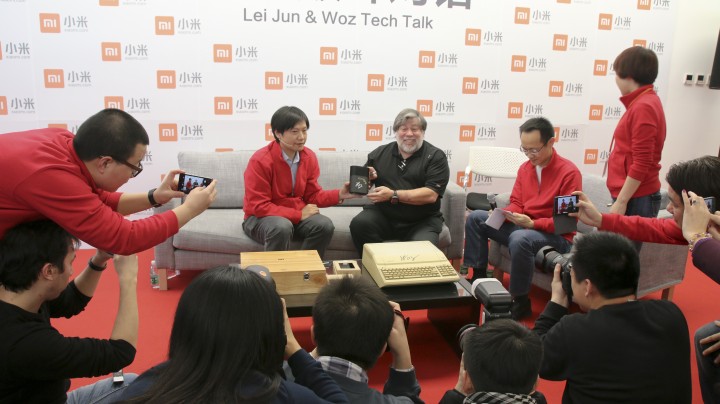 Woz revealed that while he gets paid to speak at events around the world, he wasn’t paid by Xiaomi for his latest endorsement. The source notes that Woz did most of the talking during the interview, and the only time Mr. Lei stepped in was when a reporter broached the subject that Lei’s relationship with Woz isn’t helping to kick the public perception of Lei as “China’s Jobs.” Woz and Lei also took the chance to pose with and discuss some of Xiaomi’s new products.

“I’ve said on many different occasions that if I had been called the “Steve Jobs of China” at 20 years old, I would have been very honored,” Lei said. “However, as a 40-year-old, I do not want to be considered second to anyone.” [translation]

“I’m playing with mine. I like it so far. I’ll tell you if I have problems,” Woz said. “Xiaomi has excellent products. They’re good enough to break the American market.” “Xiaomi is in a very different age. It’s hard to compare apples to apples,” Woz joked.

Woz is currently using a Xiaomi Mi3 smartphone, although it’s unclear how useful it will be outside of China.