A recently discovered security flaw in the Sudo app has been found to impact the macOS and is not limited to just Linux and BSD operating system, ZDNet is reporting. According to the researchers, the bug in the Sudo app can change the current user’s low-privileged access to root-level commands. 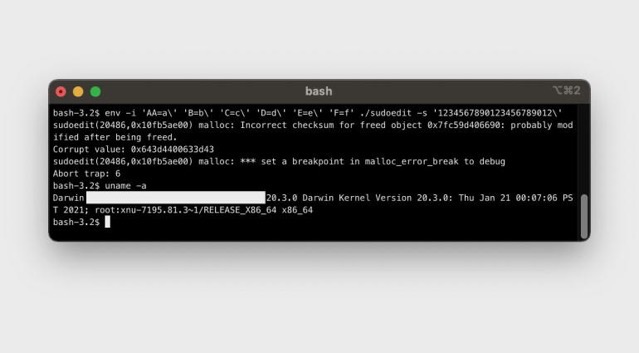 Sudo is an app that allows admins to delegate limited root access to other users. Qualys researchers have found that exploiting the vulnerability in Sudo can grant the attacker access to the whole system.

While the initial report said the bug only impacts Ubuntu, Debian, and Fedora, British security researcher  Matthew Hickey has now pointed out that the recent version of macOS also ships with the Sudo app.

Hickey said he tested the CVE-2021-3156 vulnerability and found that with a few modifications, the security bug could be used to grant attackers access to macOS root accounts as well.

“To trigger it, you just have to overwrite argv[0] or create a symlink, which therefore exposes the OS to the same local root vulnerability that has plagued Linux users the last week or so,” Hickey told ZDNet today, prior to sharing a video of the bug in question.

The researcher said he notified Apple of the issue earlier today, although no comment has yet been issued by the Cupertino company.

Just two months after its launch, OpenAI's ChatGPT has reached 100 million monthly active users making it the fastest-growing consumer app ever, Reuters is reporting. In comparison, it took TikTok about nine months after its global launch to reach 100 million users and Instagram 2 and a half years. According to a UBS study citing data...
Usman Qureshi
21 mins ago

With a $4.28 billion operating loss in Q4, Meta's Reality Labs division recorded a total loss of $13.7 billion in 2022, the company said in its earnings report (via CNBC). Back in 2021, CEO Mark Zuckerberg said Meta's future would be in the metaverse, a digital universe where people will work, shop, play, and learn....
Usman Qureshi
41 mins ago