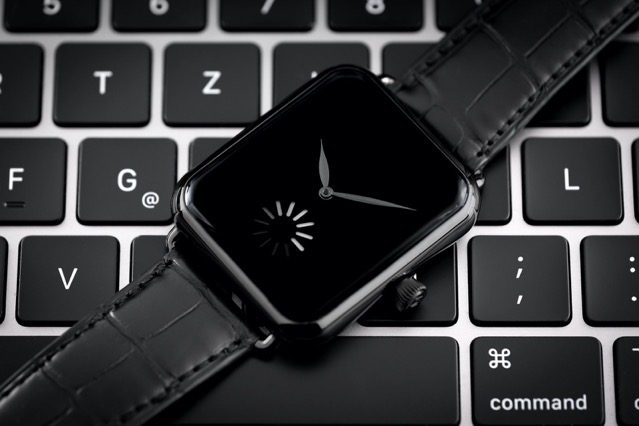 Calling it the “climax to the Swiss Alp Watch saga,” H. Moser & Cie says the Final Upgrade was created after a customer suggested the design. It features a rectangular watch face with curved, round edges, a crown at the side, and Apple Watch style lugs.

The DLC steel case features a Vantablack dial, one of the darkest known substances absorbing up to 99.9% of visible light.

Instead of a traditional seconds hand, the Final Upgrade features an Apple Watch-style loading symbol, which is of course poking fun at the Apple Watch. H. Moser plays on the theme of simplicity and “less is more” in its marketing materials.

“No updates required, no lousy autonomy, no unnecessary features, no annoying notifications, just the only reminder you ever really need: To disconnect from all the noise and cherish each and every moment,” reads a description of the watch.

H. Moser & Cie has created just 50 of the Final Upgrade watches. Check out the following video for a better idea.

Netflix has announced today they are rolling out the ability to great game handles, which are public usernames that can be used across the company’s slate of mobile games on iOS and Android. Supported games will have leaderboards such as Rival Pirates, Dominoes Café and Lucky Luna. How to create your Netflix game handle? It’s […]
Gary Ng
39 mins ago

Apple today started rolling out iOS 16.1 beta 3 for developers, with a public release of the build expected soon. YouTuber zollotech rounded up all of beta 3's changes in a recent video. iOS 16.1 beta 3 comes with a modem update that could resolve connectivity issues for users that were facing any, and other notable...
Nehal Malik
43 mins ago