TD Bank has announced it is the first bank in the world to offer customer service via Facebook Messenger, starting today. Customers just need to launch Facebook Messenger, search for TD, then will be able to connect to live agents between 6AM and 11PM EST, seven days a week.

Theresa McLaughlin, incoming Chief Marketing Officer, TD Bank Group, said “We are excited to be able to extend our ability to engage with our customers in a convenient and timely way through Messenger. More than 16 million Canadians use Facebook every day, so it is an important communication platform for us to make a more personal, human connection with our customers.”

Facebook Canada Managing Director, Jordan Banks, added “More than 700 million people use Messenger to stay connected to the people and now, businesses, they care about. We’re pleased that TD Bank Group is leading the way in the Financial Services sector, delivering their customers the best way to communicate quickly, conveniently and within context…all inside one of their favourite apps.”

We quickly tested out this customer service chat feature via Messenger–here’s how it went down: 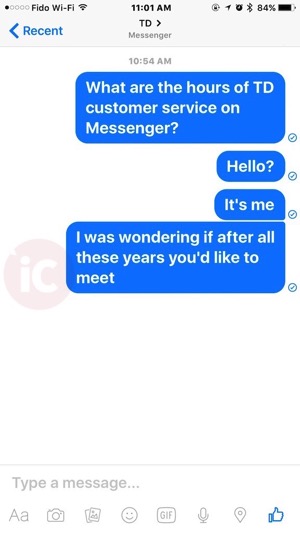 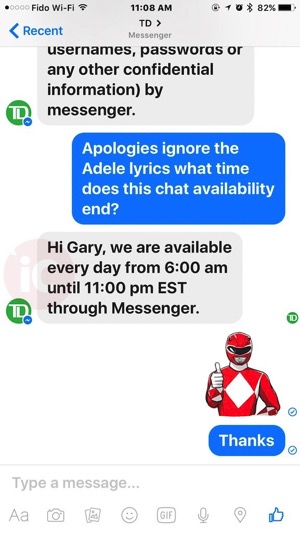 While the response time wasn’t instantaneous, we did get a response (although we may have creeped out the agent).

Other businesses are also jumping on Facebook Messenger as a way to connect with customers, as earlier this month Rogers similarly launched customer care through the platform.

Let us know how this new addition works for you.