Telecommunications companies need to embrace the unknown in order to truly move on to the next generation of mobile communications technology.

According to a new report from LightReading, Telus chief technology officer Ibrahim Gedeon thinks that 5G technology has “let us down.” While many worldwide carriers are focusing more on speed, the Telus exec thinks that the focus should be on the “edge.”

“We just spend more money and don’t make more money,” he said during a keynote presentation at the Big 5G Event in Denver. “5G is letting us down.”

This is becoming a more frequently-heard message, as more and more carriers worldwide have talked about the benefits of moving past a speed-focused business model, however, many might assume — rightly so — that these statements are made to appease the masses.

“So what does Gedeon recommend? In a nutshell, he thinks there should be less focus on the radio side and more on how 5G will affect other parts of the telco network, and specifically the “edge” — a promised land of opportunity for telcos that has been somewhat overlooked,” reads the report.

Gedeon believes that instead of focusing on faster speed, telecommunications companies should avoid utilization and focus more on expanding the 5G ecosystem.

This is where companies like Google, Amazon and Microsoft have been successful. They have been able to embrace the idea of a solution looking for a problem, demonstrated the value in disrupting the status quo, and have proved to the world that “new” is better. For today’s telecommunications companies, this means embracing the unknown.

This unknown is the “edge.” While the edge exists in the current 4G generation, it has a much higher potential in the incoming 5G era. Instead of focusing solely on increased speed, telecom companies should focus instead on creating an edge-focused proposition that offers a new functional dynamic, encourages the imaginations of a new type of developer, and creates new services — not just faster speed.

While telcos will — and should — be fundamental in the delivery process of these new businesses, products, and service, they need to gain the ability to disrupt the norm and themselves to be able to move on to the next level of worldwide communication.

Gedeon made his comments just a day after announcing Telus’ partnership with MobiledgeX, a company currently developing a platform allowing third-party applications to run on a carrier’s edge computing technology. The partnership with allow the Canadian carrier to use the technology at “‘key locations’ near the edge of its fixed and mobile access networks.”

Below is a visual graphic of what edge computing is and how carriers can generate revenue against traditional cloud computing suppliers. The example below, as described by Netmanias:

The telecoms industry is mostly focused on MEC – originally Mobile Edge Computing, now redefined with the M for Multi-Access. In theory, MEC is the concept of distributing compute functions deeper into the telecoms network – perhaps colocated with cell-sites, local cell aggregation points, fixed-network central offices, or even with small/pico-cells inside buildings, or by the side of the road. Some in the industry position it as a way for telcos (especially mobile operators) to create a distributed cloud in order to compete with Amazon – while others are more pragmatic and just see it as a way to extend new virtualised bits of the network control itself, outside the data-centre. There are versions of MEC that couple tightly with major NFV initiatives, and others that are more independent. 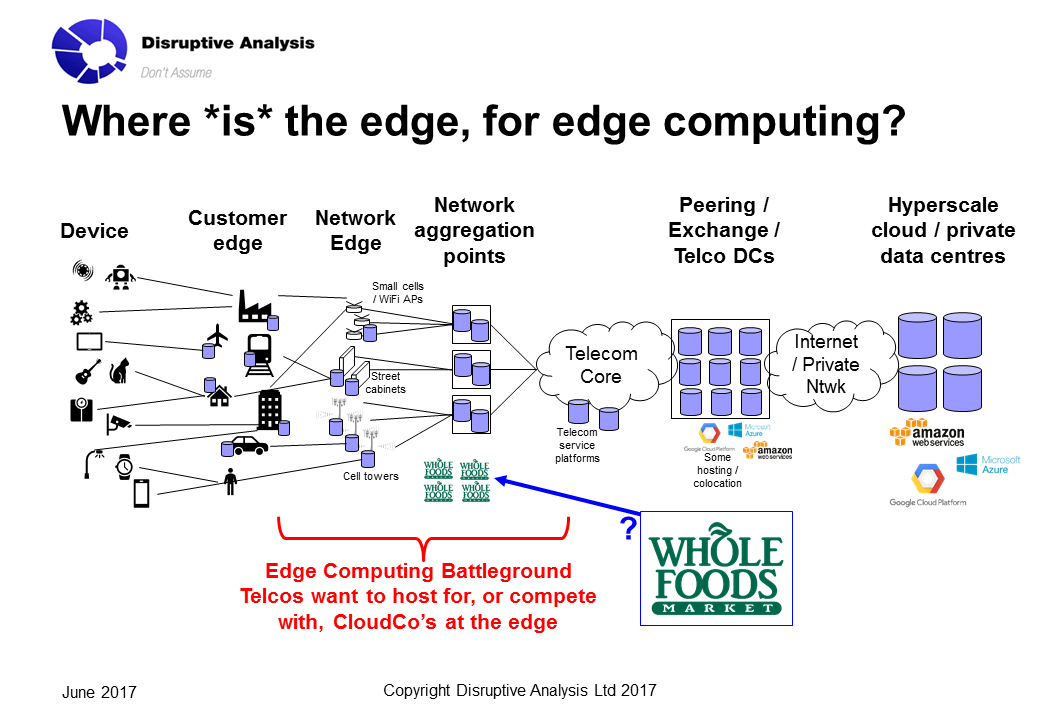