Last month, Tesla shared how a new autopilot mode called ‘Summon’ could magically have the car exit or enter your garage, controlled by your iPhone. 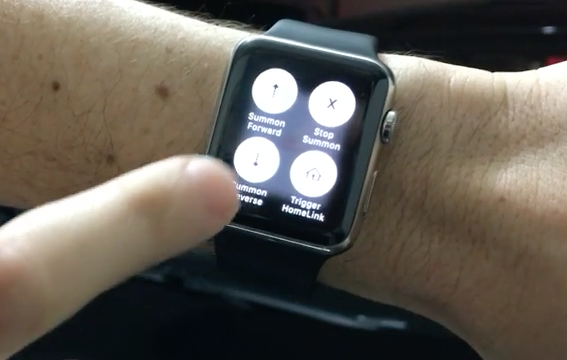 The feature has made its way to Tesla Model S owners, such as Mark Schey, who posted a video of the feature running on his P85D model to YouTube. But Schey managed to show off control of his Tesla via his Apple Watch, using the Remote S for Tesla app made by Rego Apps.

The summon feature automatically opens or closes your garage, then has your Tesla drive in or out on its own. Check it out below:

With the Remote S app, the developer notes the Tesla keyfob does not need to be within range of the car. Owners just need to press the Keyless Start button before using Summon features, explains Rego Apps developer, Allen Wong.

What does this mean? You would be able to summon your Tesla from anywhere in the world, according to Wong, because he “removed the requirement by Tesla to turn on your iPhone’s GPS and be near the car to activate Summon features.”

The future is here, folks.