Accounting for 8.3% of all plug-in vehicle sales, the Tesla Model Y dominated the global electric vehicle market in February 2022, selling a whopping 45,236 units during the month, Tesla North is reporting. 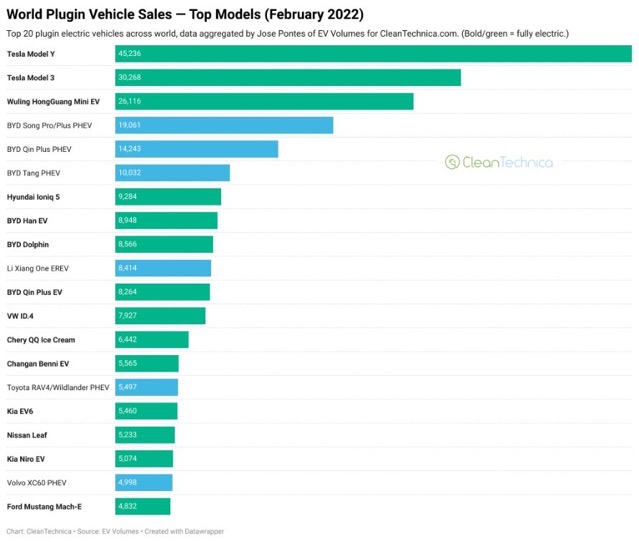 The company’s Model 3 came in second with 30,268 cars sold, whereas the Wuling HongGuang Mini EV took the third spot on the list with 26,116 units sold in February 2022.

According to CleanTechnica, global EV registrations were up 99% year-over-year in February 2022, with a total of 541,000 vehicles registered and a 9.3% share of the global automotive market. Battery electric vehicles (BEVs) alone accounted for 6.4% of sales worldwide.

Despite the Model Y and 3 outselling every other plug-in vehicle on the market, Tesla still lost out slightly to China’s BYD for the top plug-in brand spot due to the latter’s vast catalog of plug-in hybrids and its firm foothold in the Chinese market.

Now that Gigafactory Berlin is fully operational and delivering Model Ys, Tesla is expected to sell even more of its all-electric crossover moving forward.

The Model Y was also the world’s best-selling electric vehicle (EV) for January. During Tesla’s annual meeting of stockholders in October 2021, CEO Elon Musk said the Model Y “should become the best-selling vehicle of any kind.”

Back in September, Pluto TV announced it would be launching in Canada in December and as of today, the free ad-supported streaming TV service is now live. This new Free Ad-Supported Streaming Television (FAST) service is from Paramount Global, with Corus Entertainment Inc. as its Canadian partner. Pluto TV says it is the world’s leading […]
Gary Ng
24 mins ago