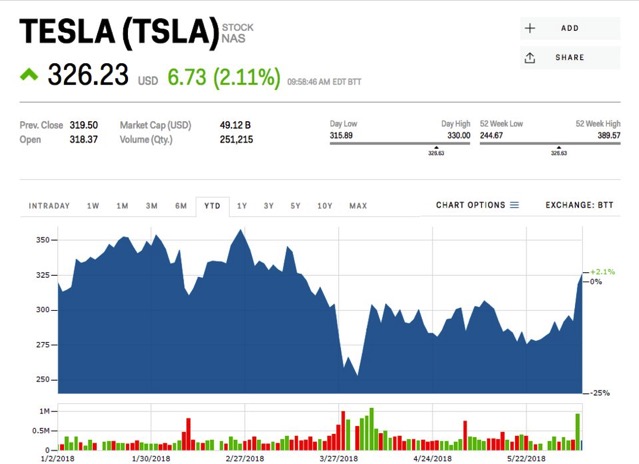 Tesla, which is said to be one of the shorted stock in the United States, saw a 9.74% spike on Wednesday following CEO Elon Musk’s announcement at the company’s annual meeting that Model 3 production was on track, and that the company should hit its production goal of 5,000 cars per week this month.

According to the data from financial analytics firm S3 Partners, the surge in Tesla’s share price cost investors betting against the stock more than $1 billion, Business Insider is reporting. Ahead of Wednesday’s surge, short sellers had netted a $572 million profit in the first five months of the year, S3 said, although it warned the trend is unlikely to continue.

“Today’s 37.7 million shares shorted and $11.0 billion in short interest will probably decline as short sellers cut their positions even further after incurring $1.1 billion in mark-to-market losses,” Ihor Dusaniwsky, managing director of predictive analytics at S3, said in an email.

“Short sellers in the most shorted U.S. securities have not performed well, with every stock except AT&T, with $1.1 billion of year-to-date mark-to-market profits, producing losses in 2018.” S3 said. “FANG short sellers have performed especially poorly, down $7.6 billion in mark-to-market losses for the year.”

Tesla’s stock price this year is so far down almost 1%.