Update 1: Further information has emerged from this story. The phone that rang was actually an alarm going off–which happens even when the iPhone is in silent mode. More info here at the NYT:

“You can imagine how devastating it is to know you had a hand in that,” said the man, who described himself as a business executive between 60 and 70 who runs two companies. “It’s horrible, horrible.” The man said he had not slept in two days. 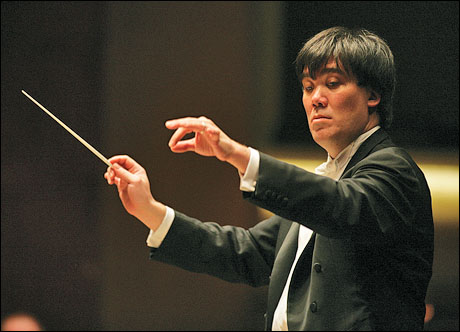 [the] calming voice of Alec Baldwin came over the speakers and reminded us all to please turn our cell phones off “out of respect for the musicians and your fellow audience members.”

Details noted by another audience member, Michael, describe the orchestra was in the middle of a piece only to be stopped by the conductor, Alan Gilbert. What made him so annoyed? The unanswered ringing of an iPhone–the Marimba ringtone, belonging to someone sitting in the front row centre, stage right. The phone was ringing repeatedly, without being answered or being sent to voicemail.

The details, as noted by Michael:

Of all places, the offender was sitting in the very front row, center section, on the aisle (stage right). In other words, right in front of the concertmaster.

Finally, Gilbert dropped his hands and stopped the orchestra, turned to the offender, and looked at him. To everyone’s disbelief, the sound just kept on going, and going. Someone shouted, “Thousand dollar fine.”

Gilbert said something like, “Are you finished?” The guy didn’t move a muscle. Gilbert: “Fine. We’ll wait.” And he turned to the podium and lay down his baton.

As the marimba kept on clanging, someone shouted, “Kick him out!” Another echoed. Some started to clap. But then others shushed the hall down, preventing pandemonium from erupting.

Finally, it stopped. Gilbert: “Did you turn it off?” The guy nodded. Gilbert: “It won’t go off again?” Another nod. Gilbert turned to the audience, and said, “Ordinarily in disturbances like these, it’s better not to stop, since stopping is worse than the disturbance. But this was so egregious, that . . .” (I lost his words here), and the audience burst into boisterous applause.

Unbelievable. You must be absolutely clueless to not know your cellphone is ringing–and that it’s not on silent. The lesson to be learned here? Turn off your damn cellphone, or be subject to an angry mob with pitchforks.