Let the ‘iPhone 5’ frenzy begin. This morning Apple confirmed the rumoured September 12th announcement date originally reported by iMore, with the latter noting its sources had ‘confirmed’ leaked designs are something we will expect next week.

Our friends over at RazorianFly have posted a new concept video dreamed up by designer @SamJohnBeck that visualizes the new rumoured features of the next iPhone, such as a taller widescreen display, hardware enhancements, the mini dock connector, the nano SIM card, and even inserts his own predictions of what could come such as ‘scan to unlock’ using Apple’s previously acquired AuthenTec’s biometric technology. 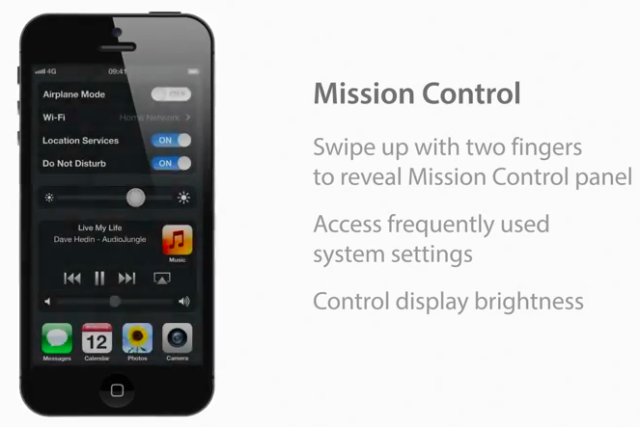 There are some other ingenious features which we all want Apple to implement such as a Mission Control for widely used system toggles (WiFi, Bluetooth, etc). Here’s how Sam describes his video:

My concept video of the forthcoming iPhone 5, demonstrating the features that may be announced at an Apple Keynote on September 12th 2012. Icons, interfaces and hardware designed from scratch in Adobe Illustrator and coloured in Photoshop. Composition and animation in After Effects and finally edited in Final Cut Pro X.

The phone is drawn as accurately as possible, based on leaked dimensions. Some features such as the new dock connector and larger screen size are almost definitely likely to appear in the new iPhone 5. Other features are included only for concept purposes, such as ‘Fingerprint Scan to Unlock’. Everything has been drawn and animated from scratch; from the icons, to the user interfaces and of course the hardware itself. I used a mixture of Adobe Illustrator, Photoshop, After Effects and Apple’s Final Cut Pro X.

Check out the video below and let us know what you think. It’s really well done and a joy to watch.

Sam previously posted an iOS 6 concept video back in June.