TikTok is the Fastest Growing News Source for Adults in UK

According to the Ofcom news consumption survey 2022, TikTok is now the fastest growing news source for UK adults, The Guardian is reporting. The survey found that the social video platform is now used by 7% of adults for news, up from 1% in 2020. 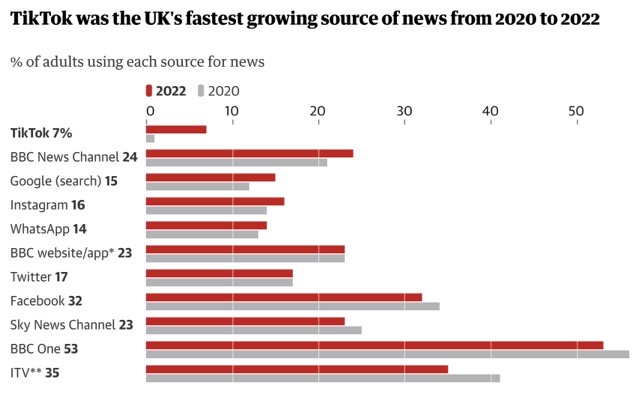 The survey also found that nearly half of people using the platform for current affairs turn to fellow TikTokers rather than conventional news organisations for their updates. Moreover, the recent growth is primarily driven by young users, with half of its news followers aged 16 to 24.

The Ofcom study shows that news organisations are having to compete with non-journalist TikTokers as a news source on the platform. Instagram has deposed BBC One and BBC Two as the most popular news source among teenagers, closely followed by TikTok and YouTube.

For those who consume news on TikTok, their main source is other people they follow, followed by friends and family, and then news organisations.

Despite TikTok’s growth in the UK as a news source, it appears to lag the US. A quarter of US adults say they always use TikTok to get the news, with nearly half of US millennial and Gen Z adults – under-41s and under-25s respectively – indicating the same, according to the analysis firm Forrester Research.

Its power as a news source has come to the fore during the Russian invasion of Ukraine, with the White House briefing 30 influential TikTokers on the war.

TikTok has more than 1 billion users worldwide and is owned by ByteDance, a Chinese tech company.