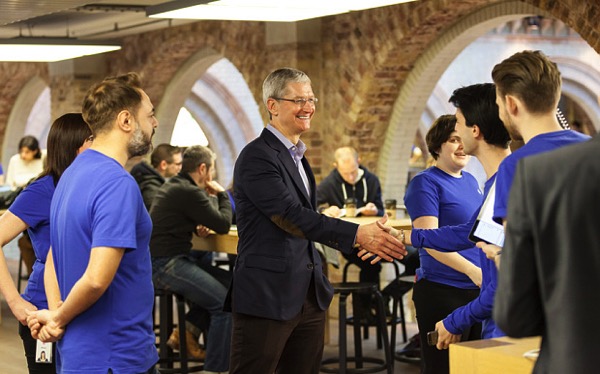 According to Cook, Apple Watch sales “exceeded expectations” despite the demand greatly exceeding the supply. Cook also pointed out that Apple Watch sales during the first nine weeks of availability were higher than sales of the original iPhone and iPad.

“Secondly, to provide a bit more color, sales of the watch did exceed our expectations, and they did so despite supply still trailing demand at the end of the quarter. And to give you a little additional insight, through the end of the quarter, in fact the Apple Watch sell-through was higher than the comparable of the launch periods of the original iPhone or the original iPad. And we were able to do that with having only 680 points of sale, and as you probably know, as I had reviewed earlier, the online sales were so great at the beginning, we were not able to feed inventory to our stores until mid June, and so those points of sale pretty much the overwhelming of the low numbers of sales were not there until the last two weeks of the quarter. And so as I look at all of these things, we feel really great about how we did.”

It was also confirmed that June sales were higher than those in April or May, suggesting that reports of falling demand were inaccurate.

“On the watch, our June sales were higher than April or May. I realize that’s very different from some of what’s being written, but June sales were the highest. And so the watch had a more of a back-ended kind of skewing.”

Apple includes the Apple Watch in its “Other Products” category in an effort to keep its competitors from getting a detailed look at its shipment numbers. The category also includes the iPod, Apple TV, and accessories like Beats headphones.

Cook said that it would not be accurate to look at the change year over year and assume that number represents the actual Apple Watch revenue. There are a lot of factors as to why this won’t work, including declining iPod and accessory sales.

Cook went on to say that Apple is excited about how the Apple Watch is positioned for the future. There are now 8,500 apps available for the device, and the company is preparing for a fall release of watchOS 2, which will bring native apps and performance improvements.