This week marks three years since Apple last updated the Mac Mini, the most affordable computer that packs the entire Mac experience into a 7.7-inch-square frame. However, Apple’s lack of attention to Mac Mini in the past few years has left Mac users wondering whether Apple will ever update the product. But now, it looks like we do have something good to look forward to.

As reported by MacRumors, a Mac user named Krar emailed Tim Cook to get an update on the Mac mini and he received a response. Apple CEO wrote that the Mac mini will be an important part of the company’s product lineup in the future, although he did not share any details. Below is a screenshot of his email and Cook’s reply. 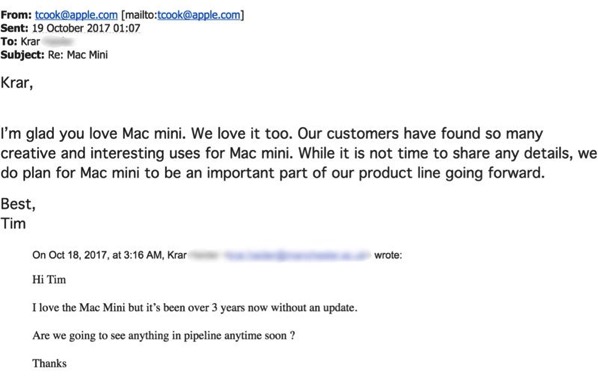 Previously, Apple marketing chief Phil Schiller has also issued a similar statement, saying that Mac mini “is an important product in our lineup and we weren’t bringing it up because it’s more of a mix of consumer with some pro use”.