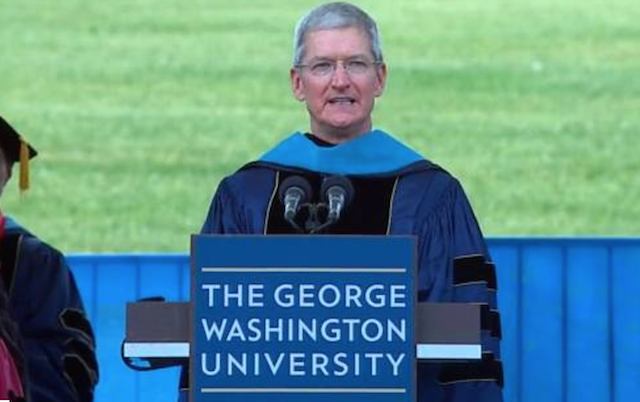 Speaking to a crowd of over 25,000 people at George Washington University’s graduation ceremony on Sunday, Apple CEO Tim Cook urged the graduates to fight for what they believe in and said that his journey of self discovery led to his view that equality is a right (via Bloomberg). “The sidelines are not where you want to live your life,” Cook said.

“There is an opportunity to do work that’s infused with moral purpose,” Cook, 54, said with the Washington Monument to his back. “You don’t have to choose between doing good and doing well — it’s a false choice, today more than ever.”

Cook’s remarks were a continuation of a broader trend toward social activism in corporate America, with his speech coming just weeks before the U.S. Supreme court is set to rule on a historic case that may legalize same-sex marriages in the U.S.

Check out Tim Cook’s speech in the following video embed: