Bob Burrough, a former Apple engineer who worked at the company for more than seven years as a software engineer under both Steve Jobs and Tim Cook, has said that Cook has converted Apple “from a dynamic change-maker into a boring operations company”, Business Insider is reporting. In an interview with CNBC, he also explained why he believes Apple’s current internal culture differs from its culture when Steve Jobs was CEO. 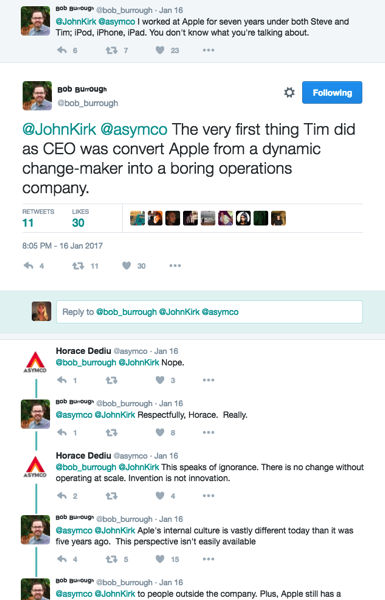 Burrow had tweeted about Apple as part of a thread conversation, to which Apple analyst Horace Dediu from Asymco disagreed and replied that the changes in Apple’s internal culture aren’t easy to see from outside the company.

“At Apple in 2007, organizationally it was the Wild West. I was hired under a particular manager but for the first two years worked on projects that had virtually nothing to do with that manager’s core responsibility. That’s because the organization wasn’t the priority — the projects were the priority.

“It was the exact opposite of ‘not my job.’ It was ‘I’m here to solve whatever problems I can, irrespective of my role, my title, or to whom I report.’ It was wild. But it was also very rewarding, because everything you did had maximal impact on the product.”

Meanwhile, Dediu believes that Apple’s management has been trying to de-emphasise the hit-driven business i.e. its ability to repeatedly deliver new hit products, because it is demoralising for employees.