Apple CEO Tim Cook has joined China’s popular social network Weibo, while making announcements for several new environmental programmes and gaining more than 300,000 followers, also known as fans, during the process, The Telegraph is reporting. Cook wrote in both English and Chinese on Weibo, announcing: “Hello China! Happy to be back in Beijing, announcing innovative new environmental programs”. 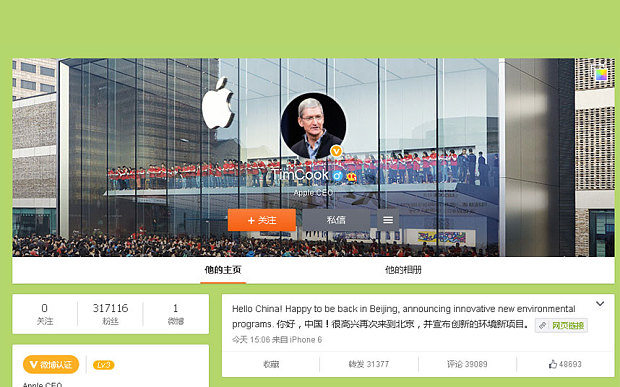 Weibo, which is also referred to as China’s equivalent to Twitter, has over 144 million active users and is one of the most popular social networks in the country.

Apple has previously announced that it is planning to introduce its reneweable energy projects to its manufacturing facilities in China, and has been working with its suppliers to reduce the overall carbon footprint. The company has also made it official that it is working alongside the World Wildlife Fund (WWF) in a five year project designed to reduce China’s environmental footprint.

Last month, Apple made it public that it was working with solar power company SunPower on a solar energy project in Sichuan Province, which will generate up to 80 million kilowatt hours per year of clean energy.