Yesterday, President Donald Trump mistakenly referred to Apple CEO Tim Cook as ‘Tim Apple’. What blunder was even more hilarious because Cook was seated directly next to the President at the time.

Now, Apple’s CEO has responded with most likely the ultimate response, by changing his Twitter name to ‘Tim Apple’ instead of Tim Cook. The CEO cleverly replaced his last name with the Apple logo, which you can see on iOS or an Apple device only.

Check out the change below: 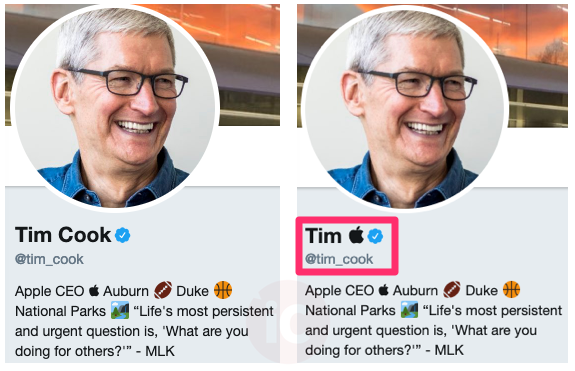 For Apple fans aware of Trump’s mistake, this is a funny response by Cook, which probably won’t get noticed by those unaware of the President’s mistake.

While the news of Trump calling the Apple CEO ‘Tim Apple’ has made headlines, the White House didn’t exactly see it that way.

Cook was at the White House after attending an American Workforce Policy Advisory Board meeting, which afterwards saw Trump accidentally refer to the CEO as ‘Tim Apple’.

Twitter Blue has once again been working on bringing its edit button to the fold. In a new tweet, the premium subscription of the social media platform shows off how the edit function will work both in terms of the user tweeting as well as the general audience seeing the changes. Earlier in September, Twitter...
Steve Vegvari
24 mins ago