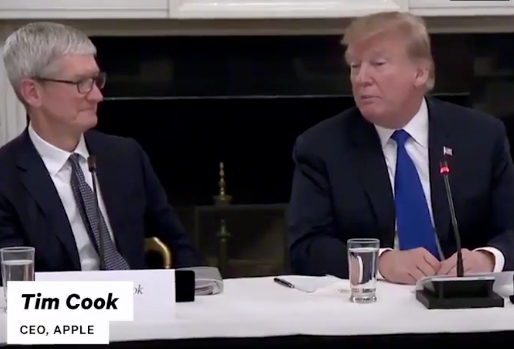 U.S. President Donald Trump made a blunder yesterday by referring to Apple CEO Tim Cook as ‘Tim Apple’. The weird thing was Cook was sitting directly next to the President as he was saying this.

Cook was present as part of the American Workforce Policy Advisory Board meeting that just took place. Here’s the transcription of what Trump said, as transcribed via The Verge:

We’re going to be opening up the labor forces because we have to. We have so many companies coming in,” Trump says. “People like Tim — you’re expanding all over and doing things that I really wanted you to do right from the beginning. I used to say, ‘Tim, you gotta start doing it here,’ and you really have you’ve really put a big investment in our country. We appreciate it very much, Tim Apple.

You can watch Trump calling Tim Cook ‘Tim Apple’, below:

Some hilarious memes have spawned on the Internet because of this, of course:

Some other industry giants besides #TimApple for @realDonaldTrump pic.twitter.com/RtLHBnmQwp

‘Tim Apple’ joins Bill Microsoft, Mark Facebook and Jeff Amazon as some of the biggest players in the tech game.