Popular iPhone, iPad to-do app maker ‘Todoist’ is already developing a companion Apple Watch app, which will enable users to view their upcoming tasks at a glance on their wrists. The company has shared both screenshots and a video of their upcoming Apple Watch to-do app, showing the ability to view tasks and categories, reply to comments and schedule or mark tasks as completed. 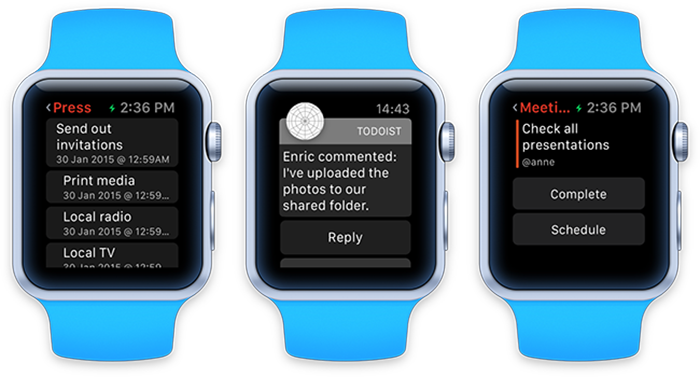 According to the developer:

“Once inside the main Todoist app, the user can access their Inbox, Projects (and full task lists within each project), Labels, Filters, and a ‘Today’ view showing all tasks for the day, as well as overdue tasks. When you tap on a task to get the detailed view, you will be able to see the task’s associated labels, its due date, its priority level, and you will be able to either “complete” or “postpone” the task directly from the watch. If you don’t want to complete or postpone the task, you use the watch’s microphone to explicitly assign a time/date to the task (this feature is still in development)”.

Check out the video below for a better idea (via MacRumors).