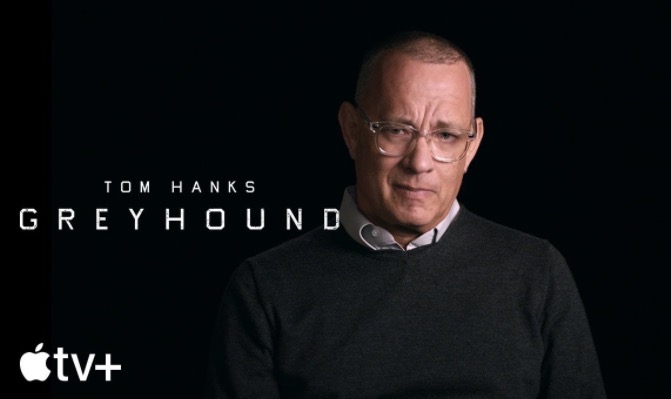 The world premiere of WWII film Greyhound is coming this Friday, July 10, exclusively on Apple TV+. The movie stars Tom Hanks, who also was a screenwriter for the film. A new ‘inside look’ was released today, detailing the Battle of the Atlantic, which the movie is based on.

Inspired by real events, Captain Ernest Krause (Tom Hanks) leads an international convoy of 37 ships on a treacherous mission across The Atlantic to deliver thousands of soldiers and much-needed supplies to Allied forces. Stephen Graham, Rob Morgan, and Elisabeth Shue star alongside Hanks. The Apple Original film was directed by Aaron Schneider and produced by Gary Goetzman.

The three and a half minute clip details the Battle of Atlantic, as told by Hanks. The star said earlier this week he was disappointed Greyhound wasn’t released first in theaters, due to COVID-19, calling the situation an “absolute heartbreak”.

“I don’t mean to make angry my Apple overlords, but there is a difference in picture and sound quality,” Hanks told The Guardian.

The film from Sony was originally planned for a theatrical release, but of course with the coronavirus pandemic, that changed things. Apple bid on the film and beat out competitors, rumoured to cost $70 million USD for exclusive streaming rights to the expected summer blockbuster.

Meta is finally making digital collectibles available to everyone on Instagram in Canada, by enabling them to share and display their NFTs on the social media platform. Web3 technologies like blockchain and tokens like NFTs are an important aspect of the economic and community-building potential of the metaverse. Meta says enabling NFTs on its platforms...
Usman Qureshi
9 mins ago

In partnership with the Orange Shirt Society, Meta has announced the launch of a new AR effect on Instagram titled “Orange Shirt Day” to raise awareness about the impact of the residential school system. The effect, developed in collaboration with the National Centre for Truth and Reconciliation (NCTR), is inspired by the experience of residential school...
Usman Qureshi
33 mins ago

Apple has removed The OG App, an ad-free and suggestion-free Instagram client created by a startup called Unf1feed, from the App Store — reports TechCrunch. The iPhone maker explained in a statement to TechCrunch that The OG App was removed earlier this week for violating Instagram owner Meta's terms of use for the service, which in...
Nehal Malik
34 mins ago