A new video shared online shows the growing resentment traditional taxi drivers have towards Uber. The video shows a Toronto taxi driver blocking an UberX driver and his fare from departing, reports CBC News. Uber connects passengers with drivers right from the company’s app on smartphones. 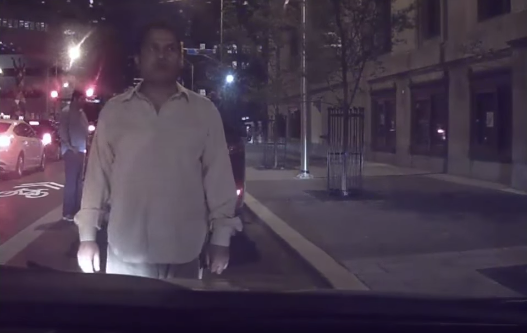 In the video, the UberX driver is picking up a passenger when a cab driver approaches to stop the ride.

The cab driver is heard saying “you cannot take them, go away,” blocking the UberX driver from departing with his fare. The UberX driver explains to his passenger the situation, and the latter can heard he’ll just walk around the corner and order a different Uber.

Meanwhile, the aggressive Toronto taxi driver continues to block the UberX vehicle, and only leaves when the Uber driver calls police, which then the video cuts out.

Scarborough-Agincourt Coun. Jim Karygiannis told CBC News Uber continues to operate illegally in the city, and says the actions by cabbies are “understandable,” despite condoning the confrontation recorded on video.

Cabbie Amrul Ahasan said it is frustrating to see Uber drivers take away their potential fares, saying “they have nothing, and they make money more than us now,” claiming he has seen 60 percent of his business disappear due to Uber.

You can watch the video below (the audio is really low and video quality is horrible):

Cab drivers in Ottawa recently filmed their own undercover ‘sting operation’ versus Uber, to show authorities the service was operating against city bylaws. The city’s mayor called the cab drivers “thugs” over their actions.