Rumours strongly suggest that Apple will replace the Touch ID home button with alternative bio-recognition hardware when it launches an OLED version ‘iPhone 8’ later this year. Although the technology enabling that transition is not yet known, a new Apple patent application published today by the US Patent and Trademark Office (USPTO) indicates just how the company might achieve that (via AppleInsider). 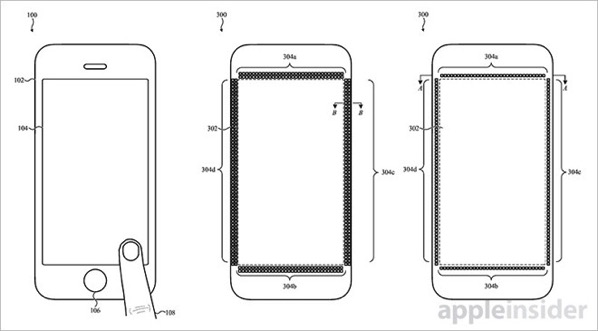 According to the filing, ridges in a finger pad introduce an acoustic impedance mismatch that causes the mechanical waves generated by a transducer to reflect or diffract in a known manner.

Like other biometric security solutions, the digital maps obtained by an acoustic imaging system are ultimately compared against a database of known assets to authenticate a user.

Thanks to its design, the acoustic system can be installed practically anywhere in a device chassis, including directly under a display. Other potential points of integration include a screen’s perimeter or bezel, around buttons and in non-input areas of a housing, like a rear chassis. The latter coupling method would allow an example system to sample a user’s entire handprint.

Apple CEO Tim Cook confirmed on Tuesday the company will purchase chips made in the U.S., built at Taiwan Semiconductor Manufacturing Company’s (TSMC) Arizona factory. Cook spoke at an event in Arizona today ahead of President Joe Biden. “And now, thanks to the hard work of so many people, these chips can be proudly stamped […]
Gary Ng
26 mins ago