TransLink, which operates Metro Vancouver’s transportation network, is set to test a new tap method at its fare gates, through wearable wristbands.

The wristband–which looks like a black version of a LIVESTRONG band–was spotted by users after being posted on Instagram by an employee testing out the new payment method.

A TransLink spokesperson told Global News they are indeed “testing Compass wristbands as a potential alternative form of payment.” Is this April 1st? 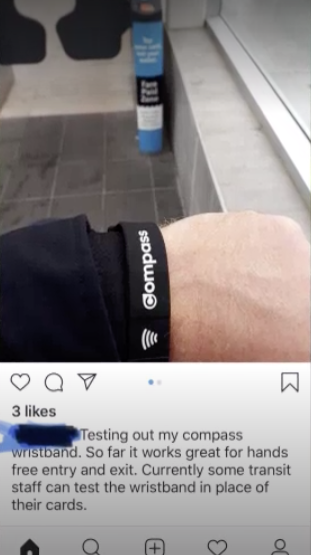 TransLink debuted their Compass Card in 2016 as a way to tap in and out of new fare gates, replacing the previous gate-free “honour system”. For years, the public demanded fare gates to stop evaders, but the transit agency countered the cost of installing gates outweighed revenue lost from fare jumpers.

Apple currently has NFC integration with select transit systems in China, Russia, the UK, the United States and Japan.

Earlier this summer, Toronto’s TTC was said to be in talks with Apple to integrate the former’s PRESTO card into the iOS Wallet app.

Wristbands Seen as Positive Alternative for Those with Mobility Issues

While the thought of wearing a wristband Compass Card does not appeal for some, it can serve a useful purpose, especially for those with mobility issues.

Sam Turcott, the executive director of Disability Alliance BC, told Global, “There’s many people who have dexterity and mobility issues who may have difficulty grasping or retrieving a compass card from a wallet,” and a wristband would “make it a lot easier.”

This spring, TransLink launched tap payments for Visa and MasterCard at fare gates, which included support for mobile wallets such as Apple Pay, Google Pay and Samsung Pay.

In 2018, many transit users have questioned why TransLink doesn’t just adopt a mobile wallet on smartphones such as Apple Wallet on iPhone for the Compass Card. You can’t lose a digital card (unless you lose your smartphone), while rubber wristbands will still get lost and end up in landfills.

What do you want from TransLink? A wristband or Apple Wallet integration at some point?