TransLink wants Pokemon GO players to use their brains and think, after reports of a man jumping onto high voltage SkyTrain tracks, was allegedly playing the game, reports News1130:

Transit Police say a man was spotted today on the guideway at the VCC-Clark station while another man filmed what he is doing. He was there about 20 seconds and set off the guideway intrusion alarm, causing the incoming trains to brake.

Transit Police spokesperson Anne Drennan said they haven’t spoken with the man, so they aren’t exactly sure what he was doing on the tracks. She did emphasize “There is very high voltage, 600 volts, along the sides of the tracks which could electrocute a person. You could get caught in the track. Any number of different things could happen if you jump down.” 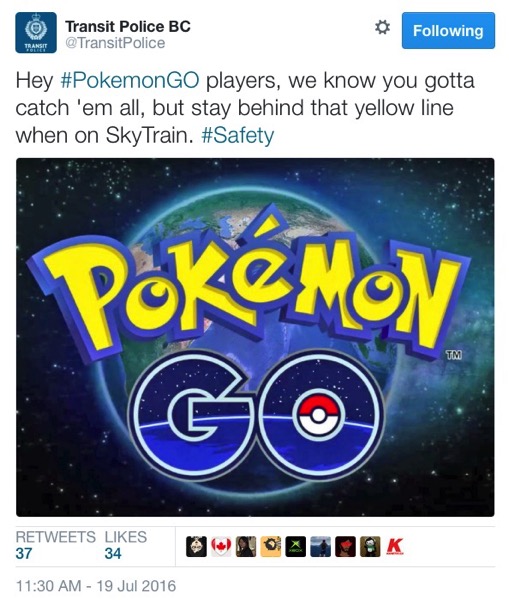 The triggering of alarms would mean oncoming trains would have abruptly stopped, potentially injuring passengers inside.

Earlier this week, Ontario’s Premier advised players to look up while walking, as a message to keep citizens safe. While some businesses have embraced Pokemon GO, other locations such as Toronto’s SickKids Hospital wants players to go elsewhere.

After launching on Sunday, Pokemon GO has become the top downloaded and grossing game in Canada.

These Pokemon GO stories write themselves. You can’t make this stuff up. #gottacatchthemall

The Apple TV+ original series Shrinking is now available to stream in Canada. Jason Segel and Harrison Ford star in a comedic drama series centred around a therapist that decided to approach his role in a new way by taking the filter off and giving unbridled honesty and advice. Shrinking stars Segel as James Lair,...
Steve Vegvari
44 mins ago