Taiwanese semiconductor manufacturer TSMC has shared some new details regarding its 5nm manufacturing process, which the upcoming iPhone 12’s A14 chip will be based on, giving us an insight into potential performance improvements in Apple’s 2020 flagship devices (via AnandTech). 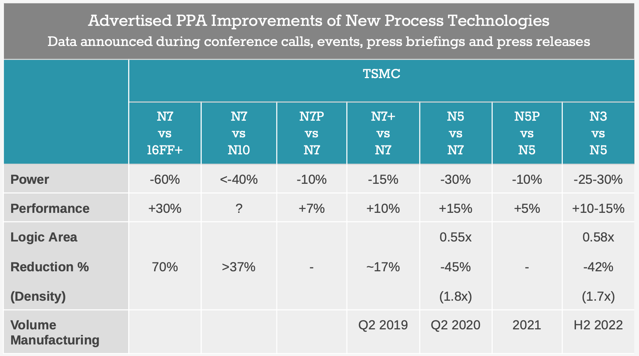 At its annual Technology Symposium, the chip maker started off with its upcoming 5nm N5 process node. The company added that it has been in mass production for several months with Apple’s next-generation SoCs being the likely first candidates for the node.

According to TSMC, its N5 process requires up to 30% lower power consumption with up to 15% faster performance as compared to the 7nm process used in iPhone 11’s A13 chip.

At the same time, the semiconductor manufacturer also shared its plans for a future 3nm process, which will potentially be used in Apple’s A16 SoCs.

Today’s biggest news was TSMC’s disclosure on their next big leap past the N5 process node generation family, which is the 3nm N3 node. We’ve heard that TSMC had been working on defining the node back last year with progress going well.

Contrary to Samsung’s 3nm process node which makes use of GAA (Gate-all-around) transistor structures, TSMC will instead be sticking with FinFET transistors and relying on “innovative features” to enable them to achieve the full-node scaling that N3 promises to bring.