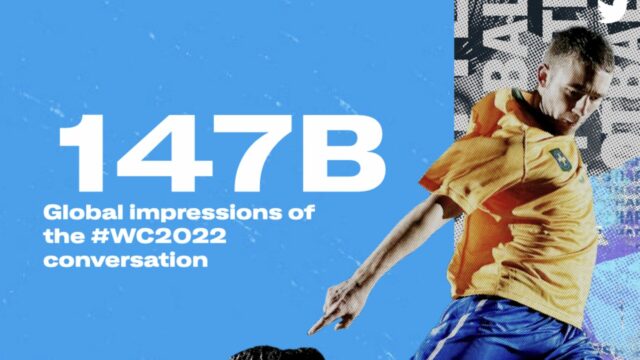 The World Cup officially concluded last weekend. Following many exciting weeks of play, Argentina ultimately walked away as the winner of the soccer (football) tournament. Following the event, Twitter is reporting numerous insights regarding the World Cup 2022.

In a blog post, Twitter reports that since November 20th, when the World Cup 2022 kicked off, there have been 147 billion impressions globally under #WC2022. Bruna Piovesan, Sr. Marketing Manager, goes on to state that the reception of the World Cup hashtag around the world more than doubled that of the #Tokyo2020 Olympics and surpassed #WC2018. Naturally, Twitter claims the bulk of the global impressions and conversations came during the Argentina and France game during the finals.

In a breakdown, Twitter states that the following moments created the Top 5 highest peaks in Tweets per minute (TPM):

In addition, here are the Top 5 most-mentioned players of the tournament:

The Top 5 most Tweeted about teams include:

Of all the countries around the world tuning in and celebrating the tournament, it was Brazil that published more Tweets than any other nation throughout the World Cup. Here are the Top 5 countries that Tweeted the most:

Finally, Twitter breaks down the impact a number of major brands and sponsors had on the tournament. It’s said Adidas, Budweiser and Hyundai were “among the most globally mentioned sponsors.” However, FIFA generated record-breaking impressions. Twitter reports that there were an average of 2 million likes per day and 226 percent more Tweet impressions driven by FIFA during the World Cup 2022 over the 2018 tournament.

We’re rounding the corner into another month and Bell Media today has shared its list of what’s new on the Crave streaming service for February 2023. February is Black History Month and Crave has highlights featuring Black creators, talent, and cultural figures with various curated special collections. One upcoming title is the TSN and Crave Original […]
iPhoneinCanada.ca
43 mins ago