A new feature called ‘Topics’ beginning to roll out this week on Twitter lets you follow more than 300 topics across sports, entertainment, gaming, and more on your timeline, just as you are currently able to follow individual accounts, The Verge is reporting. 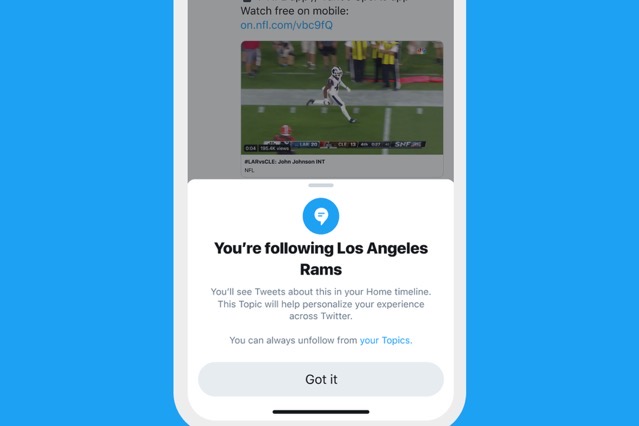 According to Twitter execs, Topics will make the platform “more approachable for new and intermittent users” and make it easier for heavier users to discover new accounts and conversations.

“We know that the main reason that people come to Twitter is to keep up on the things that they’re interested in,” said Rob Bishop who leads Topics team. “The challenge is it’s really quite difficult to do that on Twitter day to day,” he added:

“So what’s next? More topics, including on subjects that are popular internationally, Bishop said. The team is also working on a feature to mute topics, which could be useful for anyone who is trying to avoid spoilers for a popular television show, for example. Eventually, Bishop says, you may be able to “narrow cast” your tweet to followers of a particular subject, which is another ancient dream of Twitter users.”

The feature, which began testing on Android earlier this year, is set to roll out globally on November 13th.

Amazon announced an all-new Alexa experience built just for kids today, with the launch of Echo Dot Kids. Echo Dot Kids come with Owl or Dragon designs and a 2-year worry-free guarantee. If your speaker breaks, Amazon will replace it. Also included are parental controls (time limits; explicit lyric filtering) and one year of Amazon […]
Gary Ng
38 mins ago

[caption id="attachment_382288" align="aligncenter" width="1920"] Image: @OnLeaks and @Smartprix[/caption] Samsung's upcoming flagship smartphone, the Galaxy S23 Ultra, has just leaked in high-resolution renders that reveal its design and more. The leaked renders come from Smartprix and known tipster @OnLeaks. Samsung is months away from actually unveiling the Galaxy S23 series, which is being developed under the...
Nehal Malik
51 mins ago