Twitter may be taking celebrity billionaire Elon Musk to court after the latter terminated his $44 billion USD bid to purchase the company, but that doesn’t mean it will stop pushing out new features for its users.

According to TechCrunch, the social media company is testing a new feature that displays custom timelines containing curated tweets and media centred around a specific theme or interest.

Instead of using the basic Twitter algorithm, custom timelines are designed to pull and showcase content from specific accounts, hashtags, and more.

“Custom Timelines are curated feeds. These feeds may be created by third-parties who select and provide content around interests and events, or by Twitter based on general insights. For example, the Popular Videos Timeline created by Twitter, uses similar information to how we select topics to populate and order video content,” the company said on its support page for custom timelines.

Amir Shevat, head of product for developer platforms at Twitter, announced the experimental feature in a recent tweet.

Today we launched a new custom Timeline experiment – just one of the many things we’re working on over at @TwitterDev 🚀 There is a lot of potential for the developer community to build features like this in the future, and we are just getting started. Congrats to the team!🌹 pic.twitter.com/sFToIN7a2s

Twitter is currently testing the new feature with The Bachelorette custom timeline by offering it to “a small group of people in the US and Canada for 10 weeks.” Users included in the test will see prompts to pin the custom timeline next to the default ‘Home’ timeline when using Twitter on the web.

Custom timelines offer a quick and easy way for developers to create a curated Twitter experience focused on a specific interest or topic. For example, a developer can choose to create a custom timeline using a combination of filters like topics, handles, and search terms.

The new feature also gives users the ability to simply opt into updates and content revolving around one subject while keeping it completely separate from their main Twitter timeline.

Twitter noted that content displayed in custom timelines will be “selected and ordered based on relevance to the Timeline’s theme using information like search terms, Topics, handles, and manual curation.” That being the case, included tweets and content cannot be sorted by most recent.

When asked by a developer if Twitter plans on letting people create interest-based custom feeds or establishing a marketplace for pre-made custom timelines, Shevat said both are part of the firm’s roadmap for developer tools.

The executive also mentioned that custom timelines represent the first step toward giving Twitter users multiple algorithms to choose from for their feeds.

Snapchat is launching a new in-app parental tool called 'Family Center,' to help parents get more insight into who their teens are friends with on the social media platform. With Family Center, parents can find out who their kids have been communicating with, without revealing any of the substance of those conversations. "Our new Family...
Usman Qureshi
30 mins ago 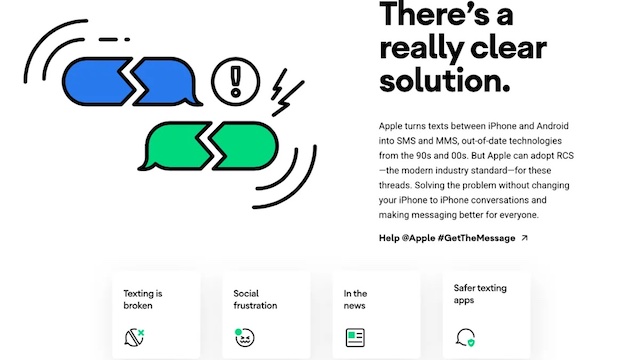 Google's Android group has launched a new website to advocate for Apple to adopt the RCS text messaging standard in iMessage, which would significantly improve texting across devices (via CNET). The campaign focuses on Apple's "green bubble" experience when messages are delivered over the SMS and MMS standards, such as the lack of typing indicators, and...
Usman Qureshi
44 mins ago