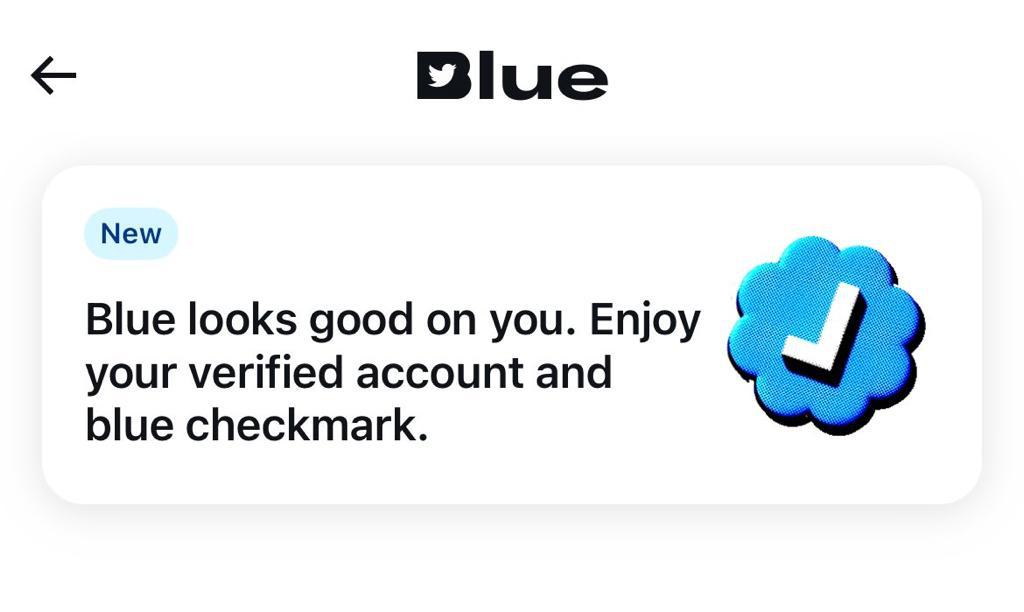 The new Twitter Blue subscription will replace the platform’s current verification process, which aims to ascertain an account’s authenticity and notability before awarding it the coveted blue checkmark, with a pay-to-verify system.

Twitter’s new subscription service appears to be launching with version 9.34.3 of the Twitter app for iOS. This update is rolling out now — it was already available on the App Store for our iPhone. It will likely make its way to other platforms in the near future.

The release notes confirm that Twitter Blue will cost $7.99/month in Canada “if you sign up now,” but also disclaim that the subscription is currently rolling out with just account verification included. Other features, like 50% fewer ads, priority ranking for “quality content,” and the ability to post longer videos, are “coming soon.”

Musk took over as CEO of Twitter after closing his long-embattled $44 billion USD acquisition of the company last week.

The new verification subscription is one of many changes the eccentric entrepreneur has in store for the company. Musk has already laid off half of Twitter’s workforce and put rush orders on new features like ‘Paywalled Video.’

As for the new Twitter Blue subscription, many have raised concerns that paid verification could make it easy for bad actors to disseminate misinformation or run scams. They could simply purchase an $8 subscription to verify their account and make it appear more legitimate and trustworthy.

However, Musk believes that leaning on a payment system and iOS/Android “is a much better way to ensure verification,” he said in a tweet on Saturday.

As soon as we confirm it’s working well in the initial set of countries and we have the translation work done, it will roll out worldwide

In addition, Twitter is also equipped with several tools to combat misinformation on the platform. One such feature is Birdwatch, a community-powered feature that helps users identify wrong or misleading information in tweets. Musk said in a tweet earlier today that Birdwatch is “an absolute gamechanger for fighting mis/disinformation at scale.”

At launch, Twitter Blue with verification will be available in Canada, the U.S., the U.K., Australia, and New Zealand. In another tweet earlier today, Musk confirmed plans to eventually roll the subscription out worldwide.

As soon as we confirm it’s working well in the initial set of countries and we have the translation work done, it will roll out worldwide

Update (1:30 p.m. PT): Musk has confirmed that existing Twitter Blue subscribers will not be automatically upgraded to the new subscription “due to the way Apple handles ‘subscriptions.'” While he added that Twitter is “working on it,” users who subscribed to Twitter Blue through Apple’s platforms will likely have to cancel their existing subscription and subscribe to the new $7.99/month plan.

That is weirdly tricky due to the way Apple handles “subscriptions”. If you subscribed to the old thing, it’s not super smooth to subscribe to the new thing. We’re working on it.

Update (2:00 p.m. PT): Musk said in a follow-up tweet that existing verified accounts won’t lose their blue checkmark until a couple of months after the new subscription is rolled out.

Update (3:00 p.m. PT): In another tweet, Musk announced a new Twitter feature coming “soon” that will allow users to attach long-form text to tweets, kind of like a native, integrated version of TwitLonger. Up next after this feature will be “creator monetization for all forms of content,” Musk continued.

Followed by creator monetization for all forms of content