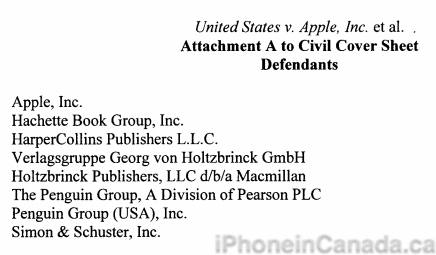 The Department of Justice has filed an antitrust lawsuit against Apple and publishers Hachette SA, HarperCollins, Macmillan, Penguin and Simon & Schuster, notes Bloomberg:

Apple and Macmillan, which have refused to engage in settlement talks with the Justice Department, deny they colluded to raise prices for digital books, according to people familiar with the matter. They will argue that pricing agreements between Apple and publishers enhanced competition in the e-book industry, which was dominated by Amazon.com Inc.

Sources note Simon & Schuster, Hachette Book Group and HarperCollins settled today. The DOJ wants a settlement to enable Amazon and other retailers go back to the wholesale model, where prices are determined by retailers. Apple and other publishers disrupted the industry by moving to the agency model, where eBook prices are decided by publishers instead.

The lawsuit notes a quote from Steve Jobs himself, via his Walter Isaacson authored biography, notes the WSJ:

“We’ll go to [an] agency model, where you set the price, and we get our 30%, and yes, the customer pays a little more, but that’s what you want anyway.”

The WSJ also notes publisher CEOs met privately on numerous occasions, which included such places as upscale Manhattan restaurants to collude over disrupting the eBook industry with Apple:

The suit says that “starting no later than September of 2008 and continuing for at least one year, the Publisher Defendants’ CEOs (at times joined by one non-defendant publisher’s CEO) met privately as a group approximately once per quarter. These meetings took place in private dining rooms of upscale Manhattan restaurants and were used to discuss confidential business andcompetitive matters, including Amazon’s e-book retailing practices. No legal counsel was present at any of these meetings.”

After all this discussion, the suit notes Apple was successful in their role in colluding with publishers, in what was Apple called their ‘aikido move’:

The suit also said, “the plan—what Apple proudly described as an “aikido move” —worked. Over three days in January 2010, each Publisher Defendant entered into a functionally identical agency contract with Apple that would go into effect simultaneously in April 2010 and “chang[e] the industry permanently.”

What never made sense was how eBook pricing would be the same as print pricing. It will be interesting to see how this antitrust lawsuit plays out. Could the iBookstore be in jeopardy?

You can check out the antitrust lawsuit document here.