New Ride Hailing Rules May Force Uber Out of Toronto

According to a report by InsideToronto, if new city measures restricting ride hailing are approved by Toronto Council, ride sharing company Uber may be forced to leave the city. The source notes that Uber Canada has sent an email to all its users titled “A Toronto without uberX” stating that hundreds of thousands of Torontonians will lose access to the currently unregulated uberX service, along with all of its legal offerings like uberWAV and uberEATS. 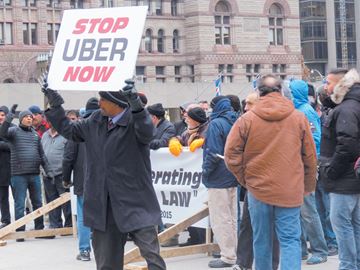 The email highlights the possible outcome if a majority of city council opts in May to support amendments made by the Municipal Licensing and Standards (ML&S) committee essentially outlawing ride hailing in Toronto. Uber spokesperson Susie Heath said in an interview, “If these amendments are passed at the City Council Meeting on May 3, Toronto will lose ridesharing and all the benefits that come with it.” She added that the move represents a direct attack on ridesharing while protecting the entrenched interests of taxi plate owners. “That’s why we hope the debate at city council takes greater account for the interests of all Torontonians, not just taxi license holders.”

Etobicoke Centre councillor John Campbell, a strong supporter of Uber and ride hailing in general, isn’t convinced the company will follow through on its threat to leave Toronto, as it did Calgary and Edmonton over similar regulation concerns. “They’re not going to be so stupid as to walk away because to do so would be a loss of a major market,” Campbell said. “(Toronto) is a cash cow for them.”

Campbell was surprised Uber has contested portions of the initial staff recommendations, such as requiring drivers to operate vehicles no more than seven years old and paying annual licensing fees. He said the staff report could have gone further in mandating snow tires, which was removed as a requirement for both cabs and Uber cars. It was eventually added by the ML&S committee.

Mr. Campbell believes that if Uber leaves, Lyft or some other private transportation company will take its place in Toronto.

Amazon is holding a virtual event right now, announcing new devices this year ahead of the holiday season. The first announcement was the new Kindle Scribe, which is the company’s largest e-reader that now includes writing capabilities. Kindle Scribe has a 10.2-inch 300-ppi HD display that’s also front-lit, and the included pen “never needs charging.” […]
Gary Ng
25 mins ago

Apple has kicked VK, Russia's take on the social media network Facebook, off the App Store globally to comply with the latest tranche of British sanctions — reports The Guardian. VK, formerly known as VKontakte, said on its website that the mobile app would continue to work on smartphones it was already installed on. However,...
Nehal Malik
27 mins ago