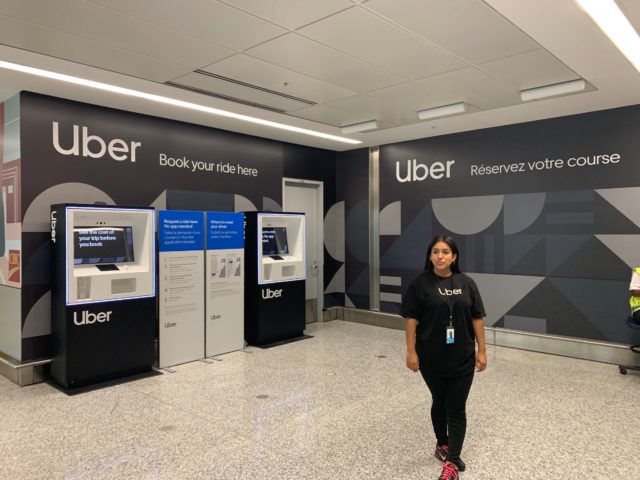 Ride-hailing app Uber has launched kiosks at the Pearson International Airport in Toronto, Ontario. Users can now book a ride from these kiosks, without a phone, reports Business Insider. The company has previously similar kiosks in malls in the San Francisco area.

Uber says that these new kiosks will help travellers who might often find it difficult to book a cab because of technical or other challenges. The kiosks will be useful for passengers who face issues getting their phone or network working soon after arriving at their destination. Travellers can request an Uber by entering their name, phone number, and the destination.

According to one of the designers of the kiosks, the new ride-hailing kiosks work similarly to “green light” hubs that Uber uses to onboard new drivers. This was modified and optimized to be used on Uber’s airport kiosks.

Explaining the hardware details on Twitter, Jon Kantrowitz, an Interface Designer at Uber said, “Top Monitor is a 32 inch LCD display; Bottom Tablet is a 2019 10.5 inch iPad Air; Swipe and chip credit card reader to the right of the tablet. Top monitor is powered by a small contained Dell PC which has an Electron app running. The tablet app is a native app.”

In a 2018 blog post announcing the launch of kiosks from Uber, Anurag Agarwalla, head of Uber’s innovation team said that the idea of ride-hailing kiosks was inspired by arcade games.

As an arcade game brings enthusiasts together around a device, the kiosks also create a social experience where experienced users help people who might find it difficult to use the service. The kiosks, according to Uber, also helps the company create brand awareness beyond the app. The big illuminated logo on the kiosks will be difficult to miss.

Have you tried these new Uber kiosks at Toronto’s Pearson International Airport?