Taxi drivers staged a city-wide protest against UberX today in Toronto, with things turning ugly when one cabbie started to pound an UberX vehicle and was dragged down the street, but escaping unscathed. 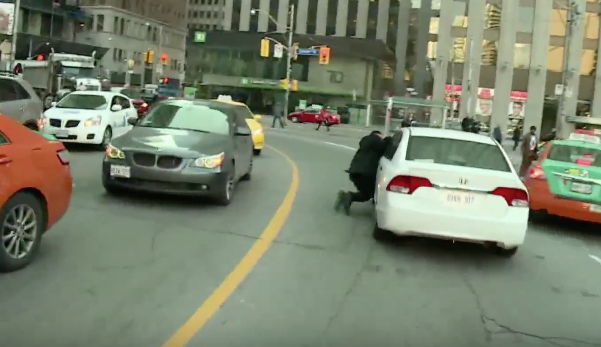 The incident was captured by CBC News:

Sajid Mugha, of the iTaxi Workers Association, condemned the driver’s actions to CBC News, saying it was “unacceptable,” but did say the incident “illustrates the frustration of our drivers.” Mugha went on to say “If someone was stealing your food, how would you feel?”

Uber’s Susie Heath in an email to CBC News the UberX driver and passenger were not harmed in the incident, but did say “We were alarmed to see this act of taxi aggression against Toronto Uber users,” said

Heath said “rather than blocking the roads and causing fear and frustration, we believe that open collaboration is the best path forward.”

Mayor John Tory called the incident “profoundly unacceptable,” while speaking to reporters at City Hall, and called on cabbies to “stand down.”

According to the Toronto Sun, nearly 2,500 taxi drivers converged at four corners of the city around 7AM local time at the following locations, jamming up streets, to protest Uber:

Cabbies are angry with UberX, which allows citizens to drive passengers (who can conveniently order a ride via their smartphone) in their private vehicles, undermining traditional taxi companies.

What did you think of this morning’s protests?