According to a report by Emojipedia, the Unicode Committee will be meeting next week at the Apple campus in Cupertino, CA, in order to discuss the implementation of emoji with red hair in upcoming Unicode standards (via The Verge). Among different proposals, one suggests offering a man or woman emoji with red hair, for which users can pick the skin tone. 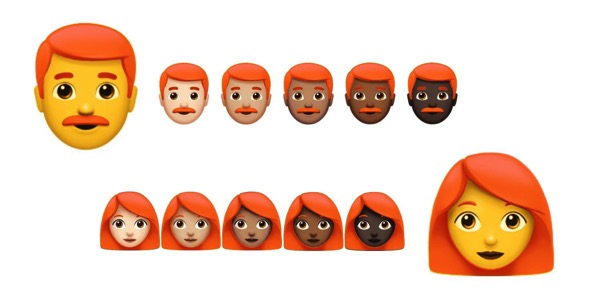 Another method proposed is to add red hair and white skin as a modifier option for current emoji that can be customized. The simplest option however would be to adapt the person with blond hair emoji to give it a more strawberry blond shade, notes the source. Although, with less than 2% of the population having red hair, the chances of adding a ginger hair modifier to all customizable emoji are slim.

Possibilities available to Unicode range from a new “person with red hair” emoji (which would likely come as a man and a woman); right through to custom hair “tags” which could be applied to any existing emoji, such as the runner, dancer, or facepalm.

With a slim 1-2% of the population having red hair, it’s yet to be determined if this would justify every emoji having a redhead version made available. Also undetermined is whether an implementation which limits redheads to a single redheaded man or woman emoji would satiate demand.

Since Unicode 10.0 is just months away from release, even if the redhead emoji are approved they would not appear before 2018.