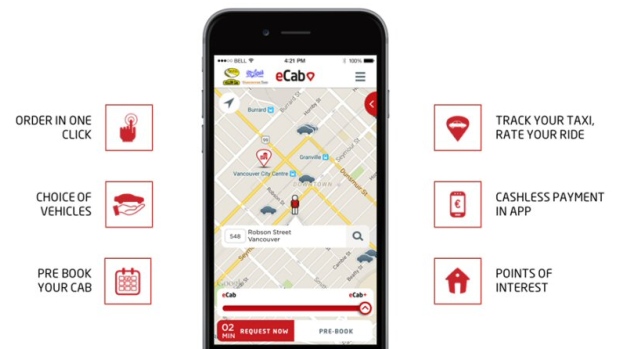 Vancouver’s four main cab companies Black Top Checker Cabs, MacLures Cabs, Vancouver Taxi and Yellow Cab, have just announced the launch of their own eCab iOS app, almost one year after these companies resisted Uber’s plans to launch in the city, CBC News reports.The eCab app is already in use in several cities in Europe, and is now available for download in the Canadian App Store, though it will officially start working in Vancouver from tomorrow.

“What we needed to do was find an app that could integrate all four companies together as one dispatch,” said Bauer. The app, which is already used in 10 cities in Europe, will launch in other Canadian cities in the coming months, according to Bauer.

Similar to the Uber app, the eCab app for iOS and Android platforms also allows users to pre-book a cab, track it in real time, pay with their phone, and rate their driver.

Last year, the above mentioned four taxi companies had launched a lawsuit to prevent Uber from launching its mobile car service in Vancouver, though the lawsuit was eventually dropped after Uber shelved its plans in the face of objections from city hall.

You can grab the app for free at the following App Store link: