According to the latest Sensor Tower data, usage of the top mobile video conferencing apps remains elevated beyond what was seen during the peak of the COVID-19 pandemic last year. Zoom, Microsoft Teams, and Google Meet all saw a surge in usage in the first half of 2021. 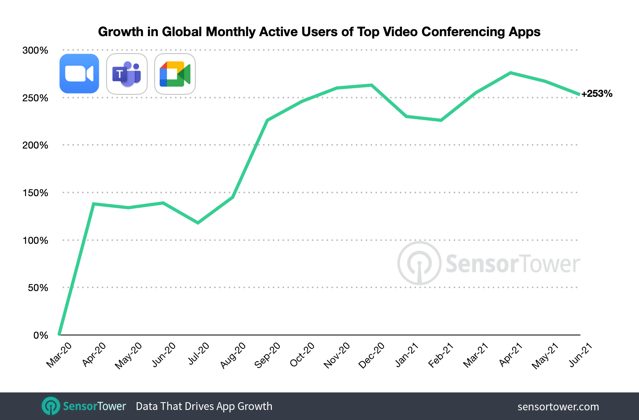 Despite recent reports of screen fatigue leading users to seek out different types of entertainment, Zoom, Microsoft Teams, and Google Meet grew 151% Y/Y in 1H21. When indexed against monthly active users in March 2020, the three apps saw more than 3.5 times more users engage with them in June 2021.

While the top video conferencing apps have seen increased usage from existing users, apps such as Zoom have continued to see elevated adoption as well.

“As a cohort, Zoom, Microsoft Teams, and Google Meet have collectively seen consistent adoption rates across the past four quarters, although their adoption is unsurprisingly down from Q2 2020 at the onset of the pandemic.

You can find out more about these statistics on the source page.