Remember when Rogers “eliminated” their System Access Fee, only to replace it with the Government Regulated Recovery Fee (GRRF), which has nothing to do with the government whatsoever? Well, today Virgin Mobile’s Chairman, Sir Richard Branson pulled out his guns to attack Rogers over this questionable and unjustified fee. I think he hit the nail on the head, so to speak:

â€œIâ€™d like to congratulate Rogers for removing one fee that never made sense, but Iâ€™m perplexed to hear that theyâ€™ve replaced it with another equally confusing one. I suppose that they hoped by putting â€˜Governmentâ€™ in the title that people would assume the fee is legitimate. It clearly states in Rogersâ€™ own advertising fine print that â€˜It is not a tax or charge that the government requires Rogers to collect.â€™ Are they deliberately trying to mislead the public?â€

â€œWe encourage Rogers to think again,â€ continued Branson. â€œCanadians are smarter than that and they deserve to be treated better. At Virgin Mobile we donâ€™t make up fees and weâ€™re always clear about what our customers are being charged for.â€

The President of Virgin Mobile Canada, Robert Blumenthal, goes on to say:

â€œWe innovate and put customers first, delivering everything people need without being sneaky. We love our customers and treating them properly is just the right thing to do. If youâ€™re with Rogers today, weâ€™re not surprised that you might be scratching your head. We invite you to switch over to us and see what mobile phone service should really be like.â€

The current attack ad by Virgin goes on to emphasize “GRRF! WTF?”, as in “What the Fee?”. Quite clever. I think the funny issue here is that Virgin Mobile Canada’s parent company is Bell. So it looks like Bell is using Virgin to channel its attack towards Rogers. Brilliant! 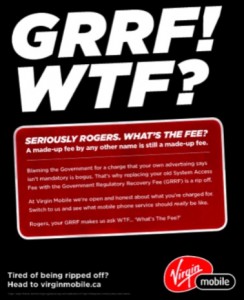 Branson is right about one thing–Canadians are smarter (I am so smart, S M R T! -Homer Simpson) and they see right through these fees. For example, Telus also removed their System Access Fee–but also increased their monthly voice plans by $5.

So what gives? Are Canadians going to continue to be gouged over and over by all of these hidden “fees”? When will this madness ever end?

â€œWeâ€™re flattered that Sir Richard Branson is paying such close attention to Rogers from his home in England. But the fact is that Bell â€“ Virginâ€™s parent company â€“ is the only national carrier still charging a system access fee for new customers. Who is Bell trying to kid here?â€

Thanks for the reply Keith–but too bad you still didn’t answer Sir Branson’s comments about WTF is a GRRF! Nice try. 😉

Thanks to everybody who sent this in! 🙂