Aiming to provide users with more options to control their messages and how long they stick around, WhatsApp has just introduced default disappearing messages and multiple durations options for new chats. 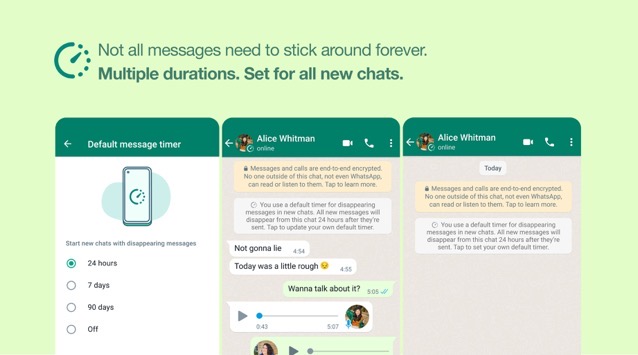 WhatsApp users will now have the option to turn on disappearing messages by default for all new chats. When enabled, all new one-on-one chats you or another person start will be set to disappear at your chosen duration.

The company has also added two new durations for disappearing messages: 24 hours and 90 days, as well as the existing option of 7 days.

At the same time, WhatsApp has introduced a new option when creating a group chat that lets users turn it on for groups they create. This new feature is optional and does not change or delete any existing chats.

“For people who choose to switch on default disappearing messages, we will display a message in your chats that tells people this is the default you’ve chosen. This makes clear it’s nothing personal – it’s a choice you’ve made about how you want to communicate with everyone on WhatsApp moving forward. Though of course, if you need a particular conversation to remain permanent, it’s easy to switch a chat back.”

To get started, go to your Privacy settings and select ‘Default Message Timer’. More information about disappearing messages is available at this link.

Elon "Chief Twit" Musk on Thursday announced another move in his ongoing reform of Twitter, saying that the company will soon start telling users if they have been "shadowbanned" on the social network and providing them with an avenue to appeal the restriction. The news comes after journalist Bari Weiss published the second installment of...
Nehal Malik
15 mins ago